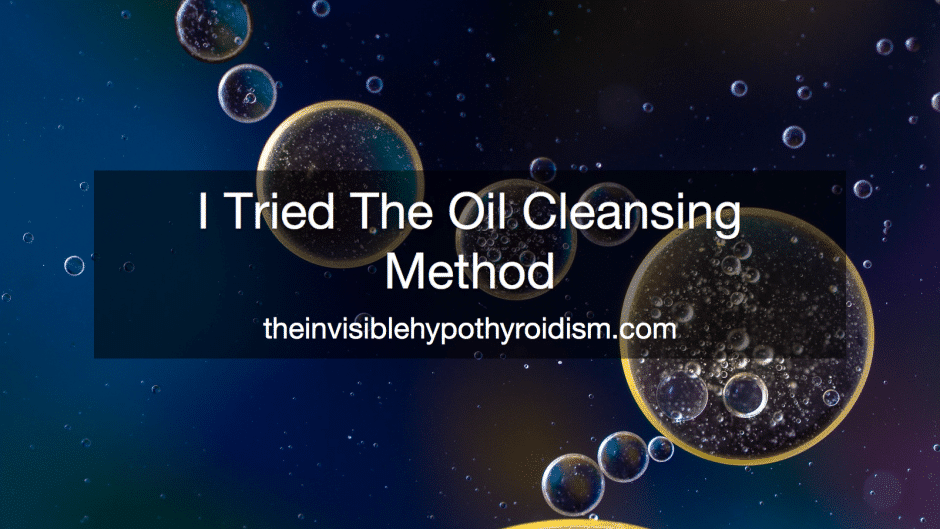 It’s no secret that I have a problem thyroid, but I also have problem skin from time to time. It flares up randomly, with acne and clogged pores, and is a mix of dry and oily in places. 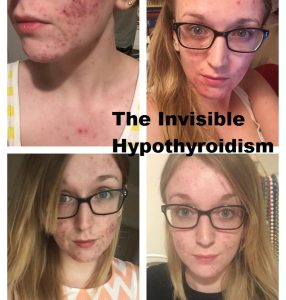 However, I’ve found a new cleansing routine that is helping.

I started getting pimples at eleven years old and as I went through my teens, it didn’t get any better. I tried various lotions and potions, exfoliators, moisturisers, toners, spot creams… I tried different skin cleansing routines, from the famous ‘cleanse, tone, moisturise’, to just cleansing, to just washing with water, to trying soap (big no-no!), to doing my cleansing routine, whatever it was, once a day or twice a day.

I tried everything in all the shops, all the routines magazines and beauty websites suggested, and it never got any better. I avoided using make up to cover my embarrassing skin, as I thought it’d make it worse.

However, I got to twenty-years-old, and I was so fed up. I could no longer say it was down to being a spotty teenager, or hormones (or so I thought). It was pretty bad all the time and it made me feel self-conscious. So, I eventually decided to invest in foundation. I eagerly got home and tried it on, and was amazed. It concealed my blemishes, and as time went on, it didn’t make my skin any worse. So it was a win-win for a while. But I wasn’t getting to the cause for my problem skin. I was just masking it with more chemicals.

It was evident that I had a hormonal issue (thyroid problems), although no one realised at the time. If you’ve read my thyroid story, then you’ll know that I showed signs of thyroid problems at just sixteen-years-old, but I believe my really heavy and unpredictable periods from thirteen-years-old were also influenced by thyroid problems looming. This could well tie in with my problem skin. It’s worth noting that my periods are now regular and no longer painful or heavy, since being on NDT for my hypothyroidism.

I wasn’t diagnosed with autoimmune hypothyroidism until I was twenty-one. At this point, my skin had actually got better. The worse I felt physically, the more my acne cleared up.

My skin looked uneven in tone, was dry and I had huge purple bags around my eyes, but the spots had cleared up. I believe the sebum production, produced naturally by the sebaceous glands, which can cause clogged pores and spots if too much is produced, was shut down, just like many other processes of my body when hypothyroid. Before being hypothyroid, these seem to have been in overdrive, and, not realising, all the over-cleansing and harsh products I was using to try and fix it, were making it worse. They strip the skin of the oils, which we actually need, drying the skin out and encouraging poor skin and break outs.

Since getting my thyroid levels back to a good place and feeling better, my sebum (natural skin oil) production seems to have ramped up again, causing poor skin and break outs once more. This has been due to switching to NDT medication and coming off of hormonal birth control, which unearthed a sex hormone imbalance in the form of oestrogen dominance.

As well as working on addressing this imbalance with my functional medicine practitioner, I also trawled the internet for natural ways to help clear the skin, chemical free and using household products. I found something called The Oil Cleansing Method. It didn’t sound appealing at first, but I grew to like the idea. So I decided to order some Castor Oil and give it a go. After all, what did I have to lose?

This is the one I ordered, which is hands-down the most popular brand – Pukka Organic Castor Oil 250ml

I used Castor Oil, for only a few pounds off of Amazon, and regular sunflower oil from our very own kitchen (my other half wondered what the heck I was doing) and mixed three tablespoons of castor oil and seven tablespoons of sunflower oil, creating a 30%-70% ratio.

If your skin feels too dry, you’ll need to use less castor oil and replace it with more sunflower oil. Castor oil is the drawing, cleansing, and purging oil for your pores.  The sunflower oil is to dilute the castor oil in thickness and additionally provide moisture.

I mixed my 30%-70% mixture in a small pot, using a spoon, then placed one tablespoon of the mixture in to the palm of my hand. I placed my other hand over it, cupping the oil until it became body temperature (you want to warm the oil up), then began to smear it all over my face. I concentrated more on my problem areas, where I get the most breakouts, and have blackheads and blocked, bumpy pores.

I massaged it in for five to ten minutes, working the oil in to my pores, and then when I felt my face was well-saturated, I placed my face over a large bowl full of steaming water, and hung a towel over my head. This steamed the dirt out of my pores to support clear skin.

Holding my head there for a minute, I felt my pores opening, releasing what was in them. I moved my head away after a minute and wiped the oil and moisture off my face. Then I repeated it another two times, until my face felt free of all oil and impurities.

And that was it! My skin felt soft, supple, looked clearer and I didn’t need to wash or moisturise afterwards. I was pretty amazed.

I’m going to carry on doing it 2-3 times a week. I’m ditching my chemical-filled face washes and toners, and on days when I don’t oil-cleanse, I’m just using water. I keep my oil blend in a little bottle, pictured above.

I’m going to try doing it once or twice a week on my chest and back too, which also suffer from breakouts sometimes.

I’ve also started using it as a moisturiser when needed, so when my face feels a little dry, I put a drop of the mixture on my finger and rub it in to my face. It feels moisturised but not greasy. I’ve also been using straight castor oil on my blemishes and it’s making them less red. Other people claim it helps hair growth, so you can rub it in to the scalp and eyebrows too.

How Does it Work?

The Oil Cleanse Method website says that it deep cleans while balancing skin oil production at the same time. The concept of this skin cleaning method is that the oil used to massage the skin will dissolve the hardened oil in your pores. The steam then opens the pores and allows it to be released.

This cleansing method can be used to support the addressing of any underlying causes for acne in hypothyroidism.

Do you suffer from acne too? Let me know in the comments below.

Read about how I banished acne as well as many other thyroid symptoms in my book: Be Your Own Thyroid Advocate: When You’re Sick and Tired of Being Sick and Tired. Reclaim your thyroid healthy life.


If you found this article beneficial, please take a moment to share it so we can help others get better with hypothyroidism and Hashimoto's, whilst also raising awareness.
Share384
Pin3
Tweet
387 Shares

Rachel Hill is the highly ranked and multi-award winning thyroid patient advocate, writer, speaker and author behind The Invisible Hypothyroidism. Her thyroid advocacy work includes writing articles, authoring books, producing her Thyroid Family email newsletters and speaking on podcasts, as well as being a founding board member for the American College of Thyroidology. She is well-recognised as a crucial contributor to the thyroid community and has a large social media presence. Her books include “Be Your Own Thyroid Advocate” and “You, Me and Hypothyroidism”.

Rachel Hill is the highly ranked and multi-award winning thyroid patient advocate, writer, speaker and author behind The Invisible Hypothyroidism. Her thyroid advocacy work includes writing articles, authoring books, producing her Thyroid Family email newsletters and speaking on podcasts, as well as being a founding board member for the American College of Thyroidology. She is well-recognised as a crucial contributor to the thyroid community and has a large social media presence. Her books include "Be Your Own Thyroid Advocate" and "You, Me and Hypothyroidism".

© Rachel Gask and The Invisible Hypothyroidism, 2015-2021. Unauthorised use and/or duplication of this material without express and written permission from this site’s author and/or owner is strictly prohibited.