The Adrenal Glands and Hypothyroidism 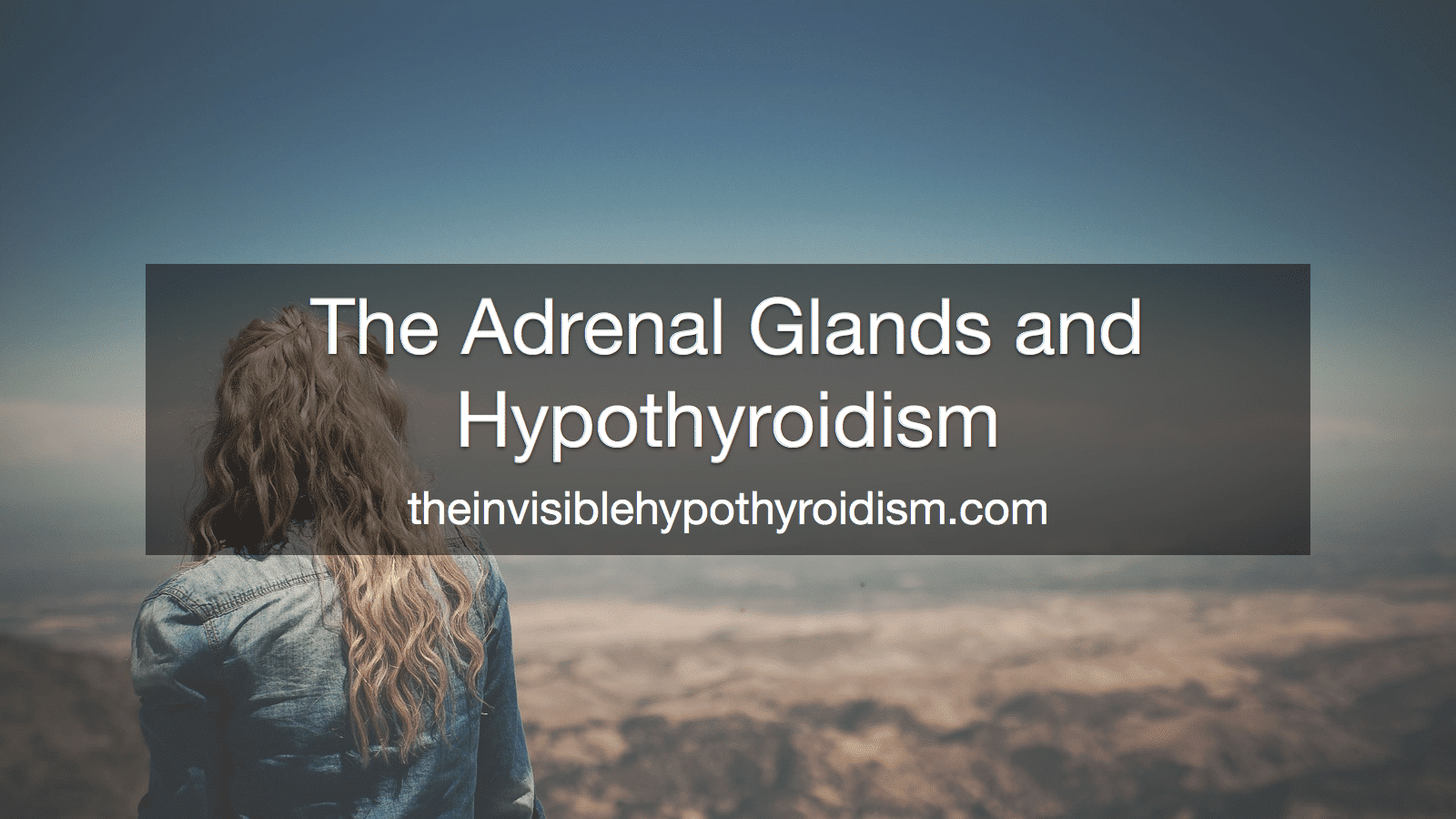 Adrenal fatigue or dysfunction (though it is more accurately referred to as hypothalamic-pituitary axis dysfunction)  is a condition not widely recognised by mainstream medicine yet, though it makes a lot of sense to many thyroid patients.

In Thyroid Pharmacist Izabella Wentz’s experience, adrenal dysfunction is present in 90% of us with autoimmune hypothyroidism. [1]

What is ‘Adrenal Fatigue’?

The adrenal glands, which sit atop the kidneys, are responsible for producing hormones in relation to stress and the one concerned in adrenal fatigue in cortisol. Now, there are two recognised conditions in conventional medicine, in association with extreme dysfunctioning of the adrenal glands: Addison’s, which is a long term condition whereby the adrenal glands do not produce enough cortisol and Cushing’s, which is the opposite – where the adrenals produce often dangerously high levels of the hormone.

Adrenal fatigue is a condition well recognised within functional medicine, where the adrenal glands produce too much or too little cortisol, though not to the extent of Cushing’s or Addison’s, but abnormal enough that it causes symptoms and issues all the same. It works on the idea that there is a scale rather than just extremes.

Adrenal fatigue can include elevated, lowered or mixed levels of cortisol, without it being the full blown condition of one of those two. This condition is very real. Thousands of people report symptoms and problems, especially thyroid related, with adrenal fatigue (high, low or mixed cortisol levels).

The below have been symptoms listed on various Adrenal Fatigue websites:

Perhaps when you exercise, you suddenly feel light-headed, a blood sugar drop and faint? Perhaps exercising at all is a real effort and feels more difficult than it ‘should’ be? Then it’s possible you could have adrenal issues.

In terms of exercising, Dr. Sara Gottfried explains in her book that a sign of adrenal issues can even include trying to exercise, only to find you crash, feeling light-headed and faint. This is due to cortisol being part of the glucocorticoid family, a substance that raises your glucose level. It’s cortisol’s job, to give you energy. When you have this reaction to exercise, it’s a sign you’ve used up your main energy supply as you’re perhaps low on cortisol and so don’t have enough ready to use.

What Is the Best Exercise for Thyroid Patients?

Are You Over Exercising and Worsening Your Thyroid Health?

The Adrenal and Thyroid Dance

The adrenal glands are part of the endocrine system, just like the thyroid. They handle many hormones that are important for a lot of bodily processes, such as handling stress. This where cortisol is produced.

According to Dr. Wilson’s book on Adrenal Fatigue, the adrenals first respond to stress by providing you with extra cortisol, but the body can only keep up with high cortisol for so long. So after this, the cortisol starts to fall, leading to low cortisol. In between this, you could have combined highs and lows. You could have high, low or combined high and low cortisol causing these symptoms. This is referred to as adrenal fatigue.  Cortisol has a variety of important functions, including: the metabolism of carbohydrates, proteins and fats, affecting blood sugar levels in your blood, helping reduce inflammation and helping you deal with stress. The latter is especially huge.

In thyroid patients of all ages, many of them may be labeled with psychiatric issues such as mental health issues, when they are actually due to hormonal insufficiencies such as adrenal fatigue. In one study, it was concluded that by correcting the underlying hormonal imbalance, many patients’ mental health improved, with some patients having a total reversal of psychiatric symptoms. [2]

My Experience With Adrenal Issues: Half The Problem

I arranged for a saliva test to be done privately (a 24-hour, 4-point saliva test). When I got the results back, they showed that my cortisol was elevated 24-hours a day, indicating adrenal fatigue and a cause for many of my ongoing symptoms; mainly fatigue.

So, adrenal fatigue could be caused by low, high or combined low and high cortisol. What’s the difference?

High cortisol has very similar symptoms to low cortisol, and is usually the first stage of adrenal fatigue. If you can catch it while it’s still at this stage then you may have an easier time addressing and correcting the adrenal fatigue. High bedtime cortisol can cause disruption of your sleep pattern, resulting in problems falling asleep, or staying asleep, so this could be a key sign also. Many people report feeling ‘tired but wired‘.

This stage is thought to come between high cortisol and low cortisol, when the adrenals cannot keep up with high cortisol any longer, and so it starts to drop at certain points.

This is not the same as the disease called Addison’s, low cortisol is actually a long-term situation where, though your adrenals may still work, they are either out-of-sync or inhibited. As explained above, this happens when they first produced elevated cortisol, then combined highs and lows of cortisol, and then low cortisol.

How Do I Fix Adrenal Fatigue?

As well as herbal and vitamin supplements, usually lifestyle and dietary changes also need to be made, in order to recover from adrenal fatigue, but it’s very much individual to each person. Lots of info on this can be found in Dr. Wilson’s book but I’d also recommend consulting a medical practitioner who recognises adrenal fatigue, such as functional doctor, functional medicine practitioner, naturopath etc.

Issues such as a sex hormone imbalance, hormonal contraceptives, leaky gut, high thyroid antibodies, diet and food sensitivities are often the root cause behind adrenal fatigue but you have to figure out what it is for you. All of them were behind mine.

Dysfunctional adrenals can result in high amounts of T3 from your thyroid meds to build in the blood, making your free T3 results look high, but with continuing hypo symptoms, or causing hyper-like symptoms. Fixing your cortisol levels should fix this.

Read about how I personally fixed my adrenal issues here.

Order or ask for a 24 hour saliva test, testing your cortisol levels at four key points of the day, to find out if you have adrenal fatigue. If your doctor won’t do this, you can very simply order it yourself and complete it at home. You can find testing options here and here.

Most doctors will only test it with a one time urine or blood sample, which is not as accurate. Four samples taken over a 24-hour day show how your rhythm of cortisol production is working. It should be highest in the morning, tailing off throughout the day. Only four saliva samples taken in one day will tell you this accurately. 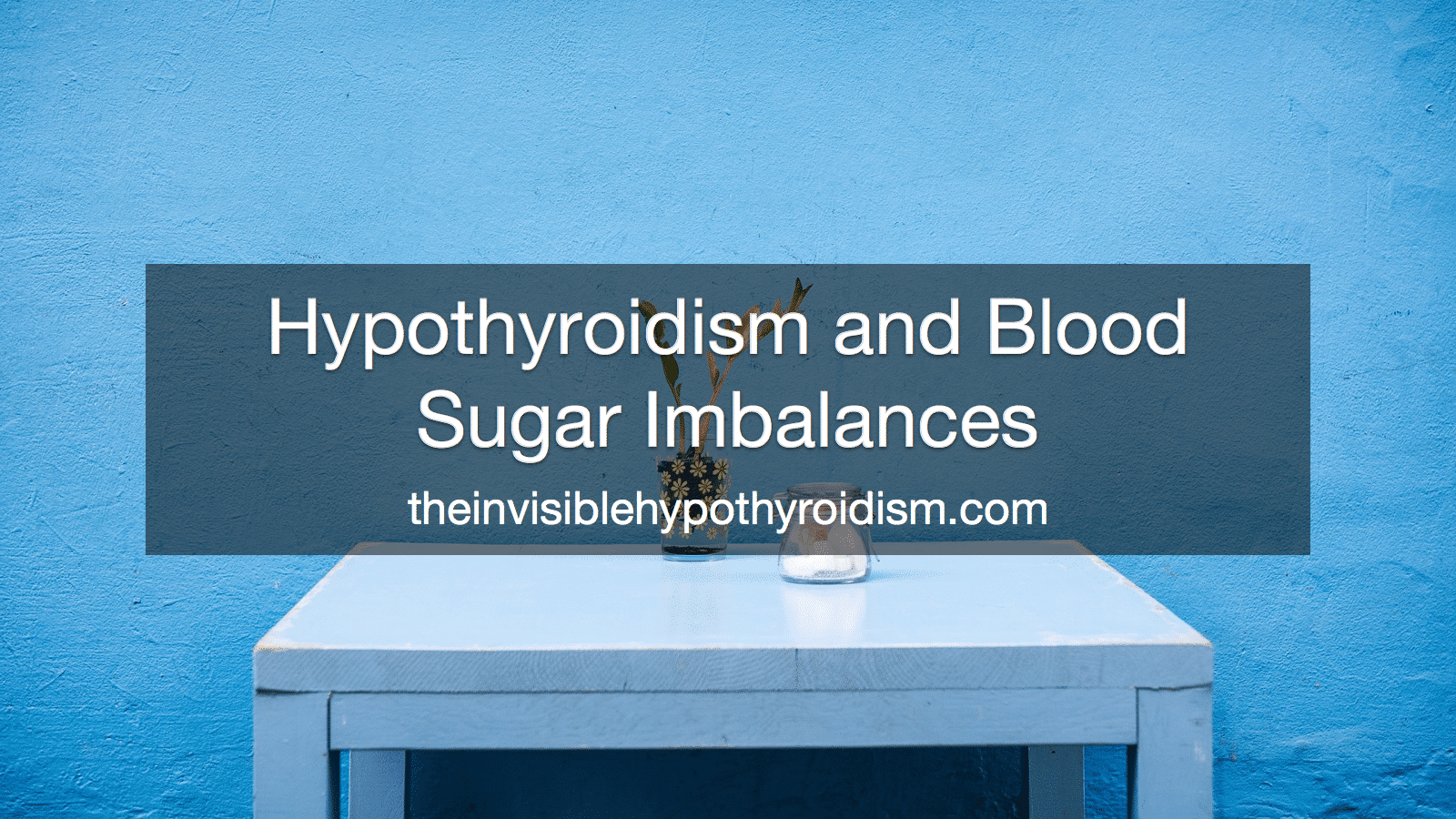 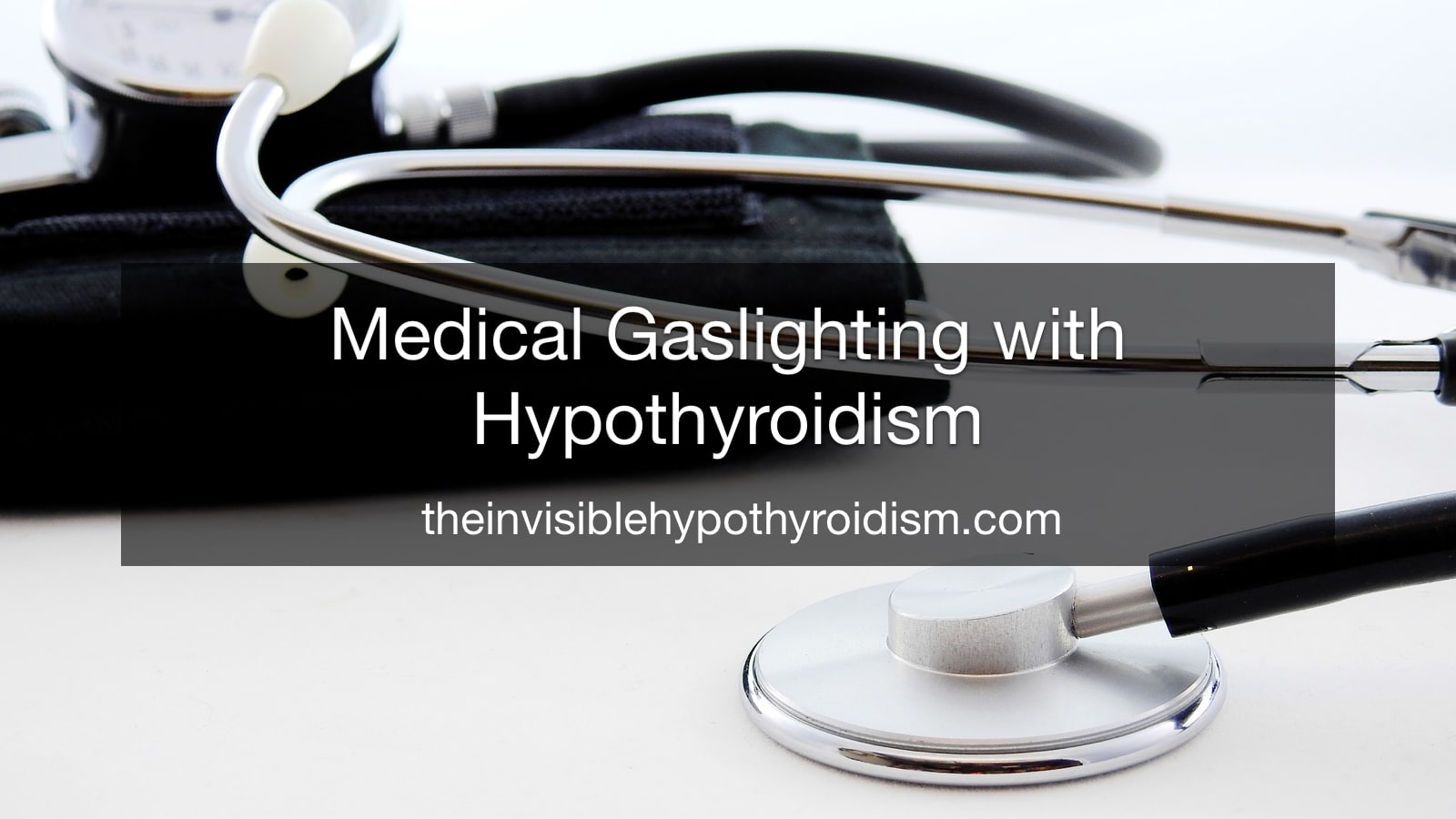 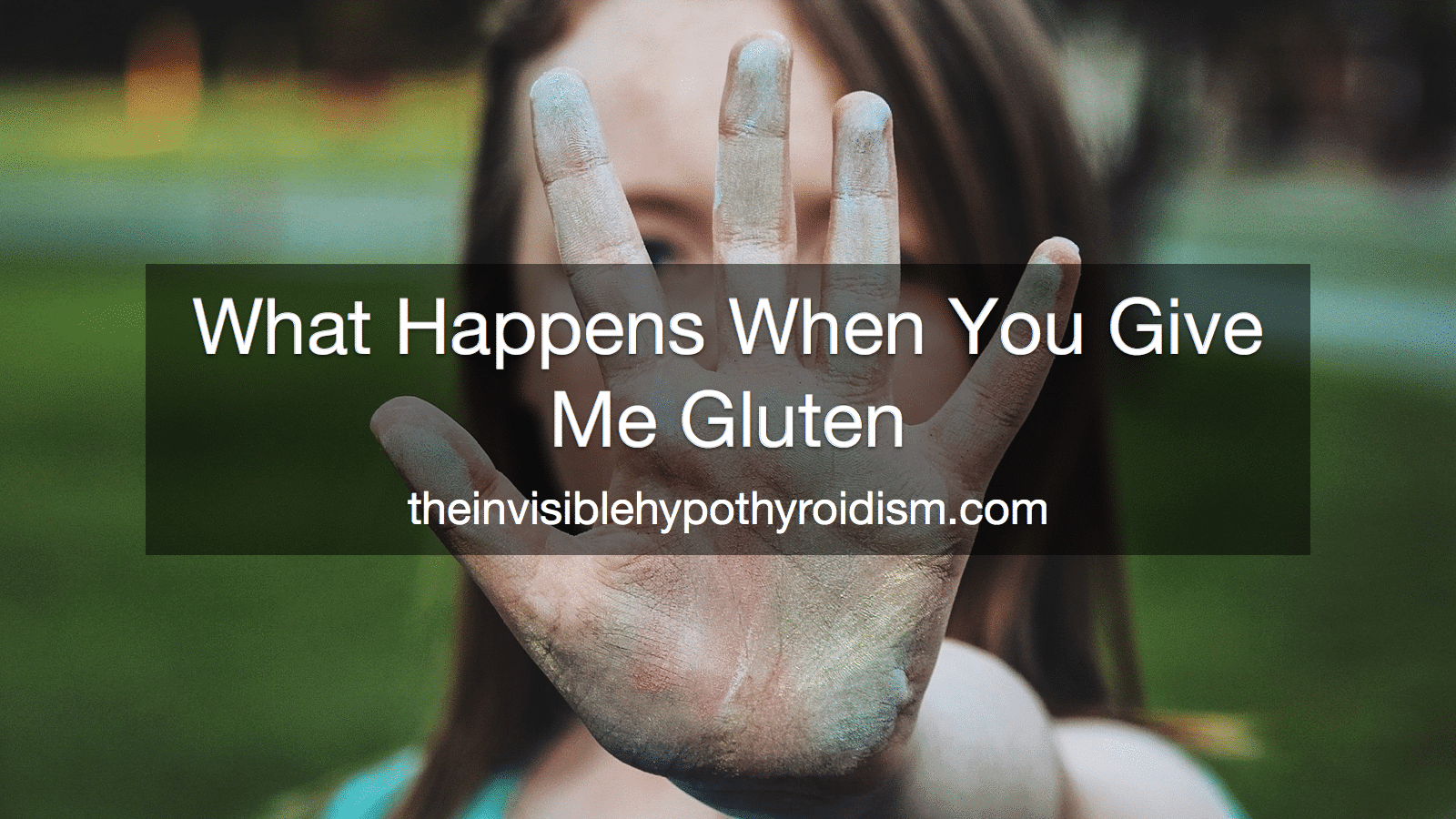 What Happens When You Give Me Gluten

Thyroid and Adrenal Fatigue; Why It's More Than 'Just Being Tired'