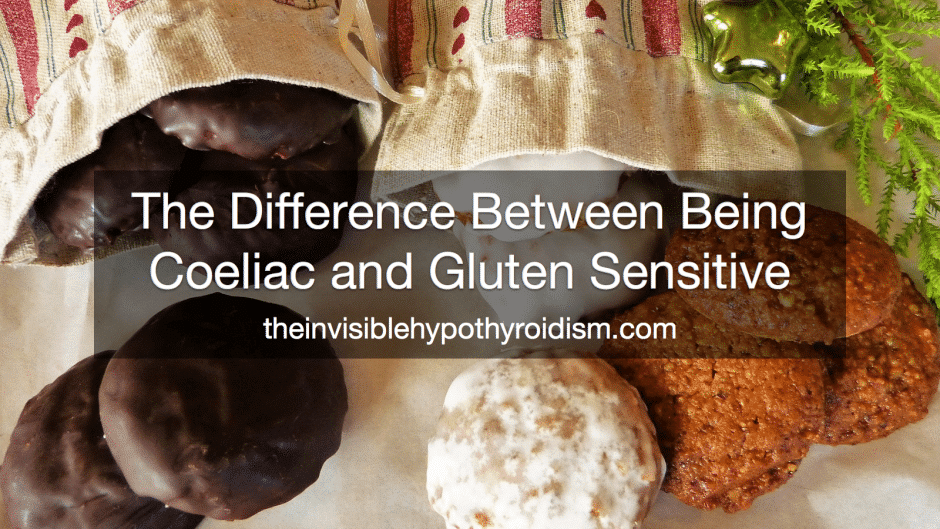 Home » Informational Posts » The Difference Between Being Coeliac and Gluten Sensitive

Did you know that you could be sensitive to gluten i.e. have it still cause you symptoms or problems, but not be Coeliac?

As people with hypothyroidism and /or Hashimoto’s, we’re often told that it’s quite likely that we do have some form of gluten sensitivity. 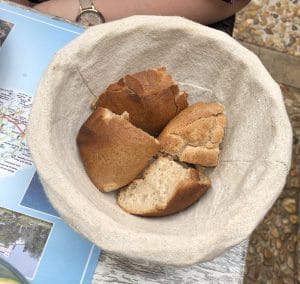 What is Gluten Sensitivity?

As explained by Coeliac UK:

“Non coeliac gluten sensitivity is when symptoms similar to coeliac disease are experienced, but there are no associated antibodies of the gut..”

So, your doctor may have run tests to check for Coeliac Disease, and it came back negative, yet if you suffer from fatigue, mood swings, brain fog, aches and pains, uncomfortable feelings in your stomach, goitre/swelling or pain of the throat, acid reflux etc. within hours or a few days of eating something containing gluten. Sound possible or familiar?

In my case, when I eat gluten, I feel fatigued, achy, fuzzy minded and sometimes even experience gastrointestinal discomfort. Yet I was tested for Coeliac Disease (before going gluten-free) and was told I did not have it. However, I definitely feel better not eating it.

Read about the thyroid symptoms that disappeared for me after I went gluten-free.

The Thyroid and Gluten Link

It’s reported that around 90% of people with hypothyroidism have the autoimmune disease Hashimoto’s Thyroiditis which is their cause. [1]

Gluten is said to trigger the same autoimmune reactions that cause you to have Hashimoto’s in the first place, since the cells of your thyroid are similar to the make up of gluten, and it confuses the body, increasing inflammation and so worse/extra symptoms. As a result, many Hashimoto’s patients eliminate gluten from their diet, and see good results.

Gluten sensitivity is different to Coeliac disease, as if you have Coeliac disease, you tend to have symptoms such as diarrhoea, bloating, bad wind, weight loss etc. with the consumption of gluten, but a gluten sensitivity can mean an increase in hypothyroid symptoms such as increased fatigue, swinging lab results (also swinging symptoms in feeling hypo one day and hyper the other), goitres/swelling in the throat, brain fog, poor mental health, acid reflux, aches and pains and poor gut health meaning low absorption rate of minerals and vitamins.

So if you often have low levels in certain vitamins (B12, D, Iron, Selenium etc.), it could well indicate Hashimoto’s and/or damage to the gut by consuming gluten.

It is believed that even if you do not have a sensitivity to gluten right now, you can develop it any time later on in life, since we’re very likely to have some kind of adverse effect to gluten eventually if not already, having Hashimoto’s. Dr Datis Kharrazian explained this in a seminar I watched for the Healing Hashimoto’s summit, held June 13th-20th 2016.

Thyroid Pharmacist Izabella Wentz conducted a survey amongst thyroid patients in May 2015, which showed that 86% of people who went gluten-free reported an improvement in digestive symptoms. Notably, only 3.5% of the respondents were actually diagnosed with coeliac disease, thus it confirms what a lot of thyroid advocates and specialist doctors have been saying all along: That you do not have to have coeliac disease to benefit from a gluten-free diet. [2]

When Italian researchers also put subclinical or ‘borderline’ hypothyroid people with coeliac disease on a gluten-free diet for one year, thyroid function normalised in 71% of them, with another 19% normalising their thyroid antibodies. The researchers concluded that in some cases, a gluten-free diet may single-handedly reverse the abnormality. [3]

The Effect of Gluten-Free Diet on Thyroid Autoimmunity in Drug-Naive Women With Hashimoto’s Thyroiditis: A Pilot Study  also concluded that their results suggested a gluten-free diet may bring clinical benefits to women with Hashimoto’s. [4]

Should You Try It?

It may well be worth a try, seeing as 90% of us hypothyroid people have Hashimoto’s, so removing gluten from your diet for a while (usually a few months at least) to test if you have a sensitivity can be useful. Especially if you have symptoms such as acid reflux, brain fog, aches and pains and fatigue. It could eliminate your final thyroid symptoms.

Have you tried going gluten-free for your thyroid condition? Have you found that it’s helped?


If you found this article beneficial, please take a moment to share it so we can help others get better with hypothyroidism and Hashimoto's, whilst also raising awareness.
Share617
Pin4
Tweet
621 Shares