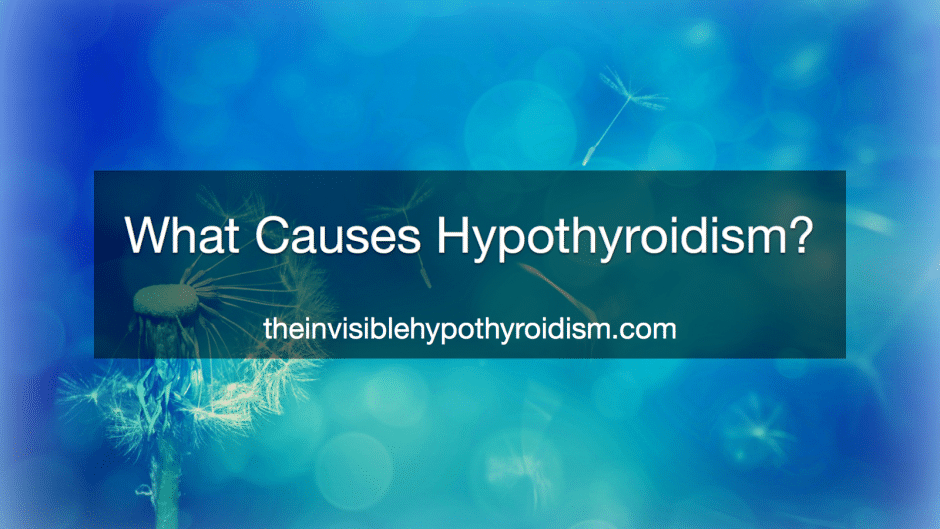 You’ve probably wondered what caused your underactive thyroid or hypothyroidism.

Could it be one of the below?

Most commonly, Hashimoto’s Thyroiditis is the cause for hypothyroidism. This autoimmune disease is said to cause around 90% of hypothyroid cases.[1]

You might not even know you have it as many of us aren’t diagnosed formally.

It can be tested for by completing thyroid antibody tests Thyroid Peroxidase Antibodies and Thyroglobulin Antibodies. Results over range in these diagnose Hashimoto’s.

It is believed that those of us carrying the genetic makeup to develop Hashimoto’s, trigger the condition by switching it ‘on’. This is known as the trigger or root cause.

The root cause or trigger can be various things, such as: adrenal fatigue/stress, toxins, poor diet, iodine deficiency, use of contraceptive pills, a blow to the immune system such as severe illness, or even pregnancy, to name a few things.

It is usually a knock to the immune system that triggers Hashimoto’s.

Thyroid Pharmacist Isabella Wentz’s site and book are good sources for trying to discoverer your root cause.

A lot of the things mentioned in this article can trigger Hashimoto’s.

Here are possible triggers of Hashimoto’s to investigate:

Glandular fever, also called infectious mononucleosis, or EBV, can also bring on hypothyroidism, as explained by Dr Durrant-Peatfield. This illness can take a hard toll on the body and patients can take months to recover from it. It is believed that the virus can damage the thyroid gland, and it may not become apparent for years after, as the thyroid’s production slows down over time.

The thyroid may not develop properly at birth, known as congenital hypothyroidism.

This is a condition resulting from an absent or under-developed thyroid gland, or one that has developed but cannot make enough thyroid hormone, making the infant hypothyroid.

The British Thyroid Foundation estimates that 1 child in every 3,500-4,000 is born with hypothyroidism in the UK.

The thyroid gland may also fail later in life, which is more common. Dr Barry Durrant-Peatifled describes this as it being ‘programmed to fail’. This essentially means that it is a ticking time-bomb as to when it will fail, but that you were always going to develop it. This can is often genetic. You may notice a pattern in your family such as signs of the condition starting in the 20’s or at middle-aged.

Excess iron, by a condition called Haemochromatosis, is also a possibility for causing hypothyroidism. Dr Barry Durrant-Peatfield covers this theory in his book also. This condition can do damage to the endocrine system, which the thyroid is a part of.

It appears that having Down Syndrome increases the risk of having accompanying hypothyroidism, and primarily the autoimmune version. [3]

Toxins are all around us. Chlorine and Fluorine are big thyroid toxins, as well as Mercury. Many people have mercury in their dental fillings, which have been said to cause hypothyroidism, but many with them don’t realise that this could be a possibility.

Mercury can affect selenium levels, which isn’t good as selenium is so vital to thyroid function. If you think your dental amalgams may be contributing to your thyroid problems, then you should definitely discuss this with your dentist. A scalloped tongue can be a sign of excess toxins in the body.

Dr Durrant-Peatfield also explains how high dosage cortisones, given for asthma and rheumatoid arthritis for example, such as dioxins and PCBs, can remain in the body for a long time; years even. They can apparently affect the liver, reproductive processes, immune system, adrenals, iodine and thyroid function. Other medications such as those for heart conditions, cancer, psychiatric conditions, lithium etc. can also affect thyroid function.

You may be disappointed to hear that caffeine, tobacco and alcohol also have a negative effect on the thyroid and are considered toxins. Tea also contains the toxin fluoride, a tissue poison. Fluoride can displace iodine in thyroid compounds, so cause conversion problems. Blood tests don’t show this, however.

Deficiencies in certain vitamins, minerals and nutrients can also lead to hypothyroidism. Iodine is a well-recognised one, as adequate Iodine is needed for proper thyroid function. Supplementing Iodine is controversial however, as many sources say to only supplement if you definitely need it. Supplementing it when you are not low could cause more problems. Some sources, like Dr Kharrazian say that taking iodine if you have Hashimoto’s can aggravate the condition.

Dr Kharrazian is one source who states that too much oestrogen, sometimes caused by the contraceptive pill or pregnancy, can cause hypothyroidism. Dr Jolene Brighten also covers the many ways in which hormonal contraceptives can lead to poor thyroid health.

I struggled a lot with heavy, painful and disruptive periods. The doctors proceeded to put me on the contraceptive pill to help this, which it did to a certain extent, but being on the pill and my undiagnosed thyroid problem led to monthly, debilitating hormonal migraines, and some doctors, including Datis Kharrazian and Dr Jolene Brighten, believe that the contraceptive pill can cause or trigger hypothyroidism, due to excess oestrogen. Interesting stuff. When I came off the pill, the migraines reduced.

Thyroid problems are known to surface at periods of hormonal stress, like pregnancy, and are more common just before the start of, or during, the menopause.

G1 proteins, the most important being Gq/11, switch thyroid processes on and off, particularly the activity of T3, the most active thyroid hormone.

If thyroid hormone levels are low, the hypothalamus produces TRH, which tells the pituitary to produce TSH, which in turn tells the thyroid to produce hormones T3 and T4. This is explained here.

The T3 stimulates the production of Gq/11, which reduces the activity of T3 in the cell, until blood levels have normalised.

This is what’s supposed to happen. However, there can be abnormal and over activity of Gq/11, which shuts down thyroid activity, but it often does not show up on blood tests, especially TSH testing. Durrant-Peatfield’s book explains this in detail.

Trauma To The Thyroid

Direct damage such as whiplash, being roughly handled around the throat, hitting your chin on the dashboard in a car accident etc. have been considered to cause hypothyroidism.

I’ve already covered a lot that adrenal problems tend to come hand in hand with thyroid problems. A failing thyroid, often coupled with T4-only medicine that doesn’t help, can cause the adrenals to become stressed and fatigued. This is what happened to me. But what if you had adrenal fatigue first, that caused or encouraged hypothyroidism? What if the adrenal system is damaged in such a way as to interfere with thyroid function and hormone uptake? Things like chronic emotional, physical and mental stress can cause the adrenals to dysfunction.

We already know that adrenal fatigue can cause thyroid medication to not work as well as it should.

A treatment often used for hyperthyroidism (an overactive thyroid), results in hypothyroidism, when the thyroid is permanently disabled from working at all or working a smaller amount than it used to. It can also shrink the size of goitres.

Radiation therapy to the neck area, such as when treating certain cancers, like lymphoma, can also lead to hypothyroidism. Radiation can damage thyroid cells, which can make it more difficult for the thyroid to produce thyroid hormones.

Having a major operation such as a gall bladder removal or hysterectomy is discussed in Durrant-Peatfield’s book as possibilities for inducing hypothyroidism. It’s believed that they can affect thyroid function, post-op.

Surgery to remove the thyroid will obviously lead to hypothyroidism (a thyroidectomy). If only part of the thyroid is removed, the remaining gland may still be able to produce enough thyroid hormone alone, but commonly doesn’t, so thyroid hormone replacement medication for life is needed.

A common one, pregnancy can be stressful on the body, also causing shifts in hormone levels and thus inducing hypothyroidism and/or trigger Hashimoto’s.

Some doctors estimate that as many as five to ten percent of women develop a thyroid problem after delivery. For some women, this starts during pregnancy, but it’s after pregnancy that many are diagnosed. Some recover after a month or two, but many are left with hypothyroidism for the rest of their lives.

Postnatal depression could be due to deficient thyroid function, so if you have been told you have postnatal depression, it is definitely worth having a full thyroid panel done to check your thyroid. Often a low Free T3 reading is the culprit.

Although rare, if something is wrong with the pituitary gland, this can interfere with the production of thyroid hormones.

The pituitary gland produces TSH, which tells the thyroid gland how much thyroid hormone it should make and release. If something is wrong with this, then thyroid hormone production and release will be wrong too, causing hypothyroidism.

A similar problem can be of the hypothalamus too. Although rare too, hypothyroidism can occur if the hypothalamus, situated in the brain, does not produce enough TRH, which tells the pituitary to release TSH.

This is a painful swelling of the thyroid gland thought to be triggered by a viral infection, such as the mumps or flu. It’s most commonly seen in women aged twenty to fifty years old.

Do you know what caused your thyroid condition?


If you found this article beneficial, please take a moment to share it so we can help others get better with hypothyroidism and Hashimoto's, whilst also raising awareness.
Share386
Pin105
Tweet
491 Shares

2 thoughts on “What Causes Hypothyroidism?”