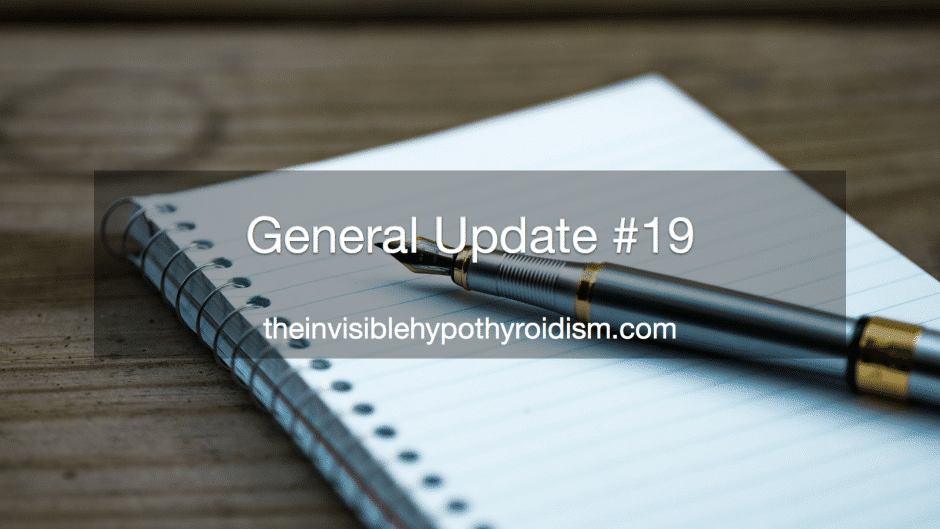 It’s been almost three months since my last general update but it feels like just a month in my time. It’s been a very up and down time indeed. 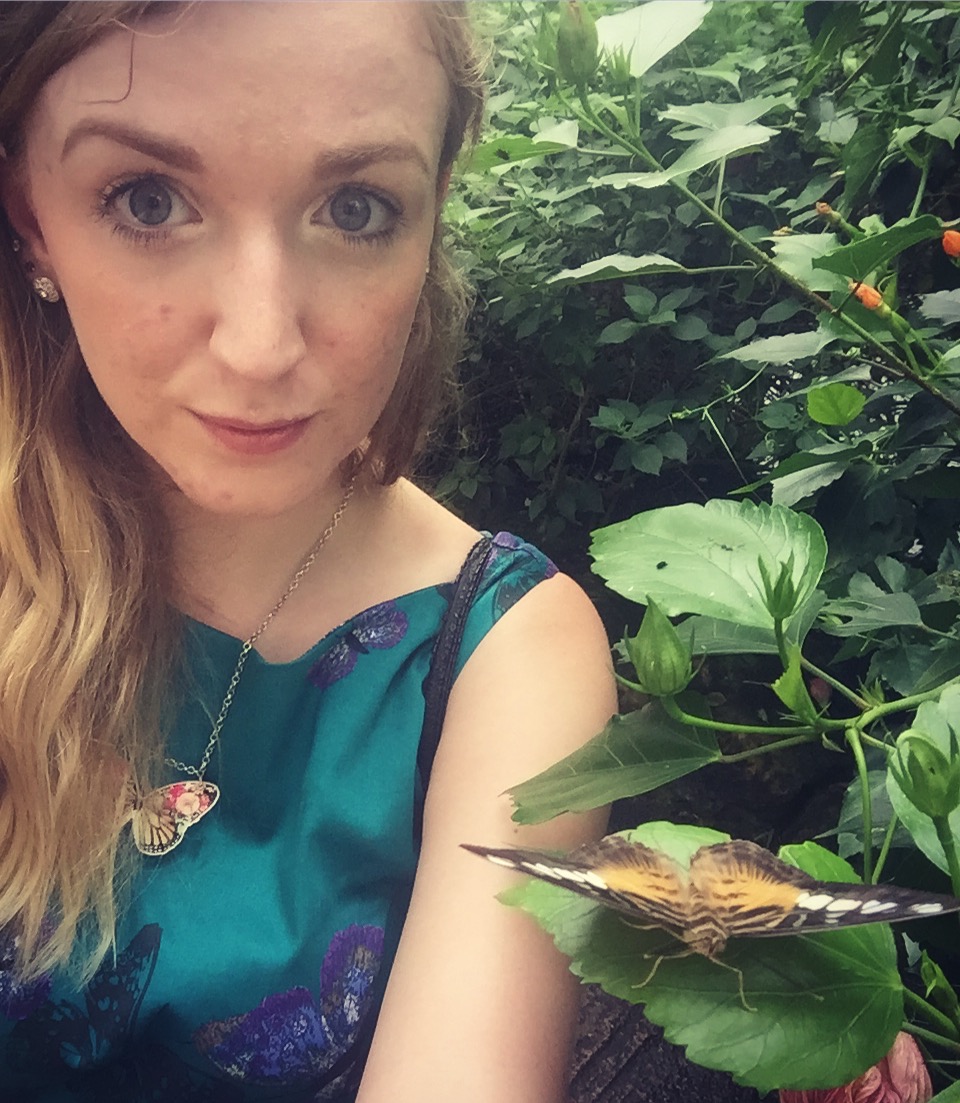 When I last wrote a general update on how I was doing in terms of my thyroid health and everything else that comes with it, I had just been signed off work for two weeks under work-related stress and anxiety. I was also incredibly depressed. Since then, I’ve returned to work and made some progress, but unfortunately been signed off for a further two weeks again from last week, after a few months being back at work and seemingly coping OK for a while.

I began CBT in late August, which lasted for six sessions, but I felt that it just wasn’t helping this time around. Don’t get me wrong, I wanted it to help, I really did, and I happily completed the ‘homework’ and tasks set for me each week, hoping that something would eventually stick. But as crunch-time arrived at work, my ability to handle to stress showed its true colours again and I began to crumble under stress and anxiety, demonstrating that the CBT really wasn’t helping this time around.

And as is the usual case in my experience, first I became anxious and then this lead to me slipping in to a real depressive state. I just couldn’t switch off from work.

Although I started new part-time hours in September, aimed at helping me get back on my feet mentally and physically, I still felt stressed with work and the extra time I now spent at home or with friends due to my reduced hours, was just filled with dread about going back to work. In the evenings, I couldn’t switch off, get to sleep or stay asleep for long and I even woke up to having a panic/anxiety attack a few times, which was pretty scary. So I eventually went to see the GP who discussed medication with me for the anxiety and depression, but agreed with me that this seemed more situational and so the best course of action would be to reduce my workload at work and get the autism assessment done ASAP to determine where the stress triggers lie and the adaptations needed to cool my mental health issues down. So he signed me off again to cool off and reflect on it all.

The referral for an autism assessment was made almost three months ago now but the waiting list is very long. My doctor wants to determine if some of my issues – struggling to effectively communicate verbally, becoming overwhelmed easier than other people, feeling irritated quickly and hating sudden loud noises or too much noise in the office at work – were due to autism or the adrenal fatigue I have. Simply giving me more medications to quieten the depression and anxiety may not work if they’re actually due to something like autism which isn’t being well accommodated to or my adrenal glands which we know are under stress. Medication is just a bandage but not a longterm solution.

Moving on to other things, I decided to come off the POP contraceptive pill after three months on it. The first couple of months seemed OK, but my periods quickly became irregular again and I was bleeding so often that my ferritin (iron stores) dropped to the bottom of the range, meaning I was close to being anaemic again, so I began iron supplements once more and came off the POP.

Weirdly, my periods regulated straight away since I came off it mid-July, as I’ve had three cycles all 27-29 days which is pretty much regular and ‘normal’, so I just hope that they continue. Maybe the POP rebooted my hormones in effect? No idea, but I’m sure I’ll find out as time goes on.

Coming off the POP messed up my acne again though and it’s been very all over the place since. Whereas most women complain that their skin is at its worst on their period, mine is at its best and the least oily when menstruating, I believe due to the oestrogen dominance. It seems to be settling again now but it is frustrating. I’ve began taking BBT readings again to track my cycles and have downloaded an app called Glow to help with that. I have been using an easy peasy BBT thermometer for this.

A few weeks ago, I did receive confirmation that my thyroid levels had settled at optimal once more (a small, but great achievement) meaning that for now, my thyroid levels are good, after a period of more pooling from excess Free T3 levels. My adrenals I haven’t retested, which has been over a year now since the last test, so I should probably do that again soon to see where they are too. Places we can order online include Medichecks and LetsGetChecked.

I’ve started seeing a private, functional medicine practitioner so I may retest them in time for my next appointment with her, so we can discuss it together and get her insight, too.

I found the functional medicine practitioner online and went to see her in person, worried about what she’d say as my case seemed so confusing and all over the place, but she was really lovely and also understanding of my budgetary restraints since I’ve gone part time at work. She even tested me for yeast (candida) overgrowth there and then for no extra fee, and easily confirmed that I do indeed have it. (An online UK test for Candida can be found here and a US test here.) Which I suspected due to my scalloped tongue, the white coating on it near the back and digestive issues such as constipation, wind and not handling alcohol at all well.

Looking at my whole health history since I was 12-years-old, in detail, she drew focus on me firstly sorting my diet out – applauding me for going gluten-free – but also suggesting I cut back on a lot of sugar and emphasise protein and fibre even more.

I had been eating a lot more protein anyway, to try and balance my blood sugar better, but my blood sugar is still very wobbly and easily annoyed, so the functional medicine practitioner helped me adjust my typical day’s worth of food to manage that better.

As I already knew, she confirmed that blood sugar imbalances further stress the adrenals which then impacts sex hormone imbalances, so by managing my blood sugar levels better, it would be a good start in improving my health in several ways. Reducing sugar, processed foods and yeast intake is also crucial in calming down the yeast overgrowth I have going on, but she also suggested some fermented foods, probiotics and other things I can do to begin getting a handle on that, too. Overall, I left the appointment feeling really positive going forward, if not a little overwhelmed, still.

I’ve also had another ear infection – my fourth, I believe, in the past year – which was really stubborn and required a few different types of antibiotic ear drops to clear and I had it over my birthday which was a bit of a downer, but it’s thankfully gone now. I really don’t know why I’m so prone to them.

Talking about being prone to things, I have also booked in for my annual flu jab after some deliberation. Whether we should have the vaccine is hotly debated amongst thyroid patients as some feel it flares up their autoimmune thyroid disease, but I’ve always had it done year on year since a bad bout of the flu almost killed me in 2011 aged seventeen, where I ended up in intensive care with pneumonia. Staying alive is most important for me but I’m unsure on whether I feel it flares up my condition personally.

So that’s a general update since my last one in July. I have no idea where the summer has gone and I couldn’t believe I was being signed off again just twelve weeks since the last time, but at the same time, I hadn’t realised that I’d been back at work that long. When you’re struggling like I am, every day can feel like a week – long and painful. I’m just trying to keep my head above water right now.

Have you tried a functional medicine practitioner?


If you found this article beneficial, please take a moment to share it so we can help others get better with hypothyroidism and Hashimoto's, whilst also raising awareness.
Share5
Pin4
Tweet
9 Shares

One thought on “General Update #19”