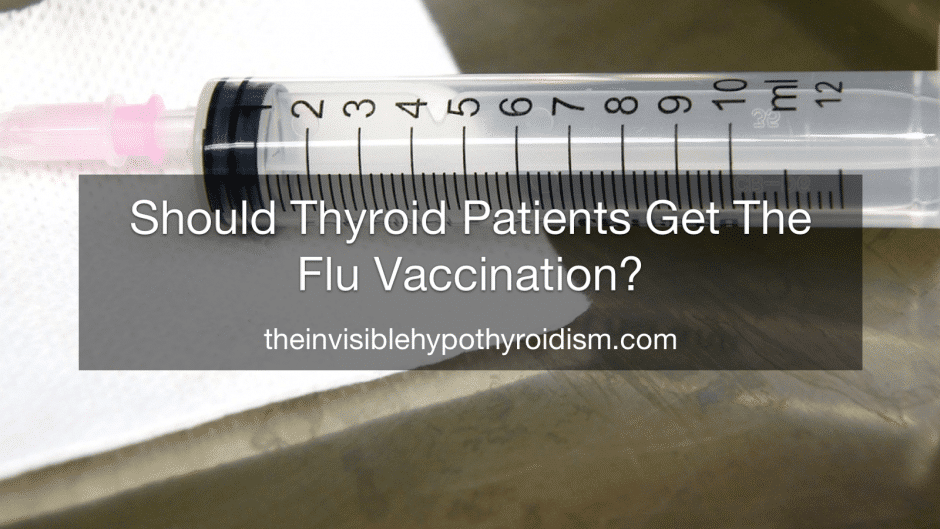 Home » Informational Posts » Should Thyroid Patients Get The Flu Vaccination?

Vaccinations are always a controversial topic and among thyroid patients, the flu shot/flu jab especially.

So, should we thyroid patients be getting the flu jab?

The flu jab (injected vaccination) stimulates your body’s immune system to make antibodies that attack the flu virus, when it inserts non-live flu virus in to the body. The idea is that if you’re then exposed to the flu virus after you’ve already had the flu vaccine, your immune system will recognise the virus and immediately produce antibodies to fight it off, lowering your chances of coming down with the flu. Despite common misconceptions, the flu jab cannot cause the flu because it is a non-live version.

In the UK, the flu jab is offered for free to many people every year. Anyone aged 65+, pregnant, children and adults with an underlying health condition or weakened immune system (which can include hypothyroidism) are offered the jab at no cost. It’s important to know however that having hypothyroidism or Hashimoto’s doesn’t immediately entitle you to a free flu vaccine. Whereas some GP’s tick the box for those with a thyroid condition to have a free flu jab, it’s not the same for all.

I am entitled to a yearly free flu jab on the NHS, but mostly due to a horrid strain of flu putting me in hospital, in intensive care on life support, back in 2011. The doctors were understandably keen to have me avoid that situation again! But I do also have hypothyroidism and Hashimoto’s.

If you’re not entitled to a free flu jab, you can pay £10 to have it done instead. But the question still remains – should we be having them at all?

How about the US? According to the Centers for Disease Control and Prevention (CDC), yearly flu vaccinations are recommended for everyone aged six months plus. In particular, they place an emphasis on pregnant women, those aged 50+, children under five, those resident in nursing homes or care facilities and people with conditions such as asthma, chronic lung disease, heart disease, endocrine disorders (such as thyroid disease) and kidney, liver and metabolic disorders. So this covers a lot.

Should We Get The Flu Jab?

Always speak directly with your doctor about whether they believe you’re an at-risk person for complications of the flu, as your own personal situation may warrant having the jab.

I’m not going to get in to the debate about the general controversy surrounding various vaccines, for which many people have strong views for and against, but instead just look at the flu jab in relation to thyroid disease and also autoimmune disease.

I’m not going to tell you whether or not you should get the flu jab, as I couldn’t possibly make that decision for you. Instead I’m hoping to give you the information you need to help you make a well-informed decision yourself.

For most of us with hypothyroidism, we have the autoimmune disease Hashimoto’s to thank. Around 90% of us have Hashimoto’s as the culprit causing hypothyroidism [1], but many thyroid experts and specialists are concerned about the flu vaccination making Hashimoto’s worse. Some have even said they’ve witnessed a decline in their client’s health after having the vaccine, such as a thyroid/Hashimoto’s flare up.

Therefore, asking whether or not you should get the flu jab as an autoimmune disease patient, is a reasonable question, as the vaccine interacts with your immune system which is already functioning not too well.

As Hashimoto’s is reported to be triggered by certain events and substances, it’s also worth knowing that just like EBV, Influenza B is suspected to be the trigger behind some of us developing a thyroid condition. The development of post-flu jab GBS (an autoimmune condition that affects your nervous system), does also suggest that vaccines can possibly trigger autoimmunity.

Unfortunately, there are no studies which seem to show the flu vaccine directly affecting thyroid health and function, but equally, there aren’t studies solidifying that it is completely safe either.

We do know that it affects the immune system though, as the very point of the vaccine is to have the body produce antibodies against the virus. This isn’t ‘natural‘ and enough research hasn’t been conducted in to it to know the possible outcomes, but for those with autoimmune conditions, it’s not unreasonable to question how these can be affected.
Interestingly there is also some scientific evidence that certain vaccines (though not necessarily the flu shot) may actually help prevent the manifestation of autoimmune diseases, by altering a person’s immune system in such a way that it is protective. [2]
Subacute thyroiditis has also been reported in one study, to show up after a flu vaccination. Although definitely quite rare, the study states that subacute thyroiditis should be considered as a possible outcome following a flu jab. [3]

Weighing up the chances of:

We may feel as if our choice is between going without the vaccination and risking catching the flu and it making us very ill, with having the vaccine and that worsening our health too. It’s a bit of a double edged sword! No one can say what your reaction will be until it is done.

Whether you decide that the flu jab is for you or not, remember that the best way to avoid contracting the flu is with good hygiene and certain vitamins, minerals and nutrients. Bone broths, Vitamin C, D, Zinc and Selenium all support the immune system, as does a well-balanced and nutrient dense diet.

Washing you hands, using tissues (and binning them immediately), maintaining a good sleep schedule and keeping stress levels low also all help to avoid coming down with illness. For more information on looking after your thyroid health in the winter, check out this article.

In my case, I opt to get the flu jab every autumn, as I’d rather not risk getting so ill that I almost die again. When I caught the flu at seventeen-years-old, it put me in intensive care in hospital and I could have died. Weighing up whether the vaccine causes a flare up in my thyroid symptoms against contracting the flu and it putting me in hospital, is a no-brainer in my case. But everyone’s case is different and only you will know what you’re comfortable doing. Flu vaccine or no flu vaccine.

Do you get the vaccine? Feel free to share in the comments below but please be respectful of other peoples’ opinions too!


If you found this article beneficial, please take a moment to share it so we can help others get better with hypothyroidism and Hashimoto's, whilst also raising awareness.
Share1K
Pin4
Tweet
1K Shares

Rachel Hill is the highly ranked and multi-award winning thyroid patient advocate, writer, speaker and author behind The Invisible Hypothyroidism. Her thyroid advocacy work includes writing articles, authoring books, producing her Thyroid Family email newsletters and speaking on podcasts, as well as being a founding board member for the American College of Thyroidology. She is well-recognised as a crucial contributor to the thyroid community and has a large social media presence. Her books include “Be Your Own Thyroid Advocate” and “You, Me and Hypothyroidism”.

15 thoughts on “Should Thyroid Patients Get The Flu Vaccination?”

Rachel Hill is the highly ranked and multi-award winning thyroid patient advocate, writer, speaker and author behind The Invisible Hypothyroidism. Her thyroid advocacy work includes writing articles, authoring books, producing her Thyroid Family email newsletters and speaking on podcasts, as well as being a founding board member for the American College of Thyroidology. She is well-recognised as a crucial contributor to the thyroid community and has a large social media presence. Her books include "Be Your Own Thyroid Advocate" and "You, Me and Hypothyroidism".

© Rachel Gask and The Invisible Hypothyroidism, 2015-2021. Unauthorised use and/or duplication of this material without express and written permission from this site’s author and/or owner is strictly prohibited.