If NDT Is so Good, Why Won’t My Doctor Prescribe It? 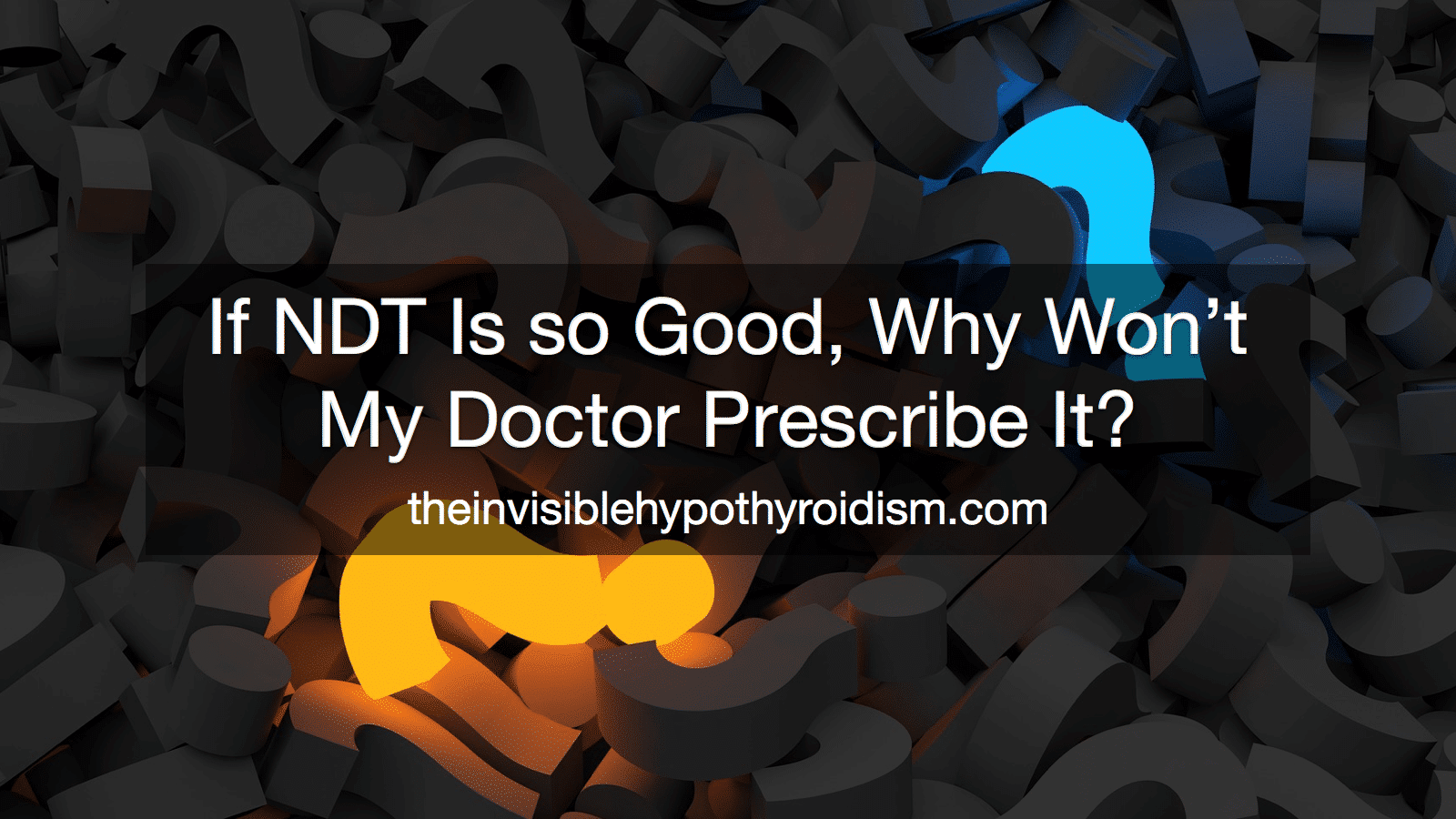 Many people with hypothyroidism don’t feel well on T4-only medications such as Levothyroxine or Synthroid, yet when they ask their doctor about trying a different medication, such as Natural Desiccated Thyroid, many doctors refuse.

If it’s so good at treating hypothyroidism, why won’t my doctor prescribe it for me?

According to Dr Barry Durrant-Peatfield, Natural Desiccated Thyroid was used in the early 1900’s to  1950’s with great effect on patients.

T4 is the storage hormone, and T3 the most active.

Thyroid Pharmacist, Isabella Wentz, explains that the standards of testing the level of hormones in NDT in its early days, were nowhere near today’s standards, so this sometimes resulted in inaccurate dosing. Doses were compounded and apparently any pharmacist could put any amount into a capsule, so this was not always an accurate process. The scale they used was not very sensitive, either.

Today’s standards for compounding have changed though, with more-sensitive scales used, by specially trained pharmacists, in specially certified compounding pharmacies. So this is no longer an issue.

However, in the 1950-60’s, pharmaceutical companies noticed that doctors were frustrated with inconsistent results from the above mentioned process, so they created a more predictable product that they claimed was more reliable (and that they could make some money out of, not forgetting); isolated T4-only medication. This was the birth of Levothyroxine and other T4 medications.

The Birth of T4-only Synthetics

Manufacturers of T4-only medication claimed that patients taking T4 on its own, could convert the T4 into some T3, which is arguably the most needed thyroid hormone, as it is the essential active thyroid hormone. The other three thyroid hormones produced, T1, T2 and Calcitonin, are only produced and needed in very tiny amounts. So, taking isolated T4 made sense in theory, as long as it’s going to convert in to the T3 that we need.

But a lot of people always have and always will struggle to convert T4 in to T3. And the body isn’t meant to live on T4, a storage hormone, alone.

Also, T4-only medication was not the only medication with improved predictability at this time, as eventually, NDT’s dosage variability was addressed too, but by that time, it had fallen out of favour, with T4-only medications being pushed and misinformation surrounding NDT circling to further support synthetic T4 use.

The pharmaceutical companies went on to patent their T4-only drug brand names, so this is where we can start to suspect that money was a big factor in NDT’s decline, especially as NDT comes from a natural (animal) source, so cannot be patented. Therefore, pharmaceutical companies were going to do whatever they could to encourage the decline in this medication they didn’t stand to make as much money off, and push for T4 to become the new norm.

Imagine if our doctors began prescribing NDT over the patented T4-only medications. Those pharmaceutical companies wouldn’t profit, would they?

STTM explain that at the time of this, a lot of false claims were also circulating, regarding how ‘unsafe’ NDT was. It’s suspected that these claims could have been started by the pharmaceutical companies and doctors backing the switch to T4-only meds and myself and others wonder if they were (possibly still are?) receiving incentives for prescribing T4-only meds, from “big pharma.”

The false claims about NDT were later confirmed to be a hoax, but by the time this was identified, the damage to NDT had already been done, and T4-only meds were now the number one drug of choice for hypothyroidism.

Some doctors these days still believe these false claims, and claim NDT to be unsafe or inconsistent. Most patients who use it completely disagree though.

It has also been claimed that the makers of T4-only medication such as Synthroid for example, have sponsored and continue to sponsor medical meetings, golf outings, symposia, research grants, and speakers’ fees, and have provided free patient literature, pens, pads, mugs, and other giveaways and marketing items. So the doctor’s prescribing it have a lot to gain. Alternatively, they also have a lot to lose if they don’t…

Given the amount of people with hypothyroidism, this newly created T4-only medicine gave pharmaceutical companies a big opportunity to make quite a bit of money, but it appears to be at the expense of the thyroid patients taking it, and still feeling unwell.

Millions of thyroid patients have been left with little to no quality of life, due to T4-only drugs not working for them and doctors refusing to look at the bigger picture of treating patients based on their own individual needs and requirements. Some people do just fine on T4-only medication, for some it helps them part-way, and for others, not at all.

Since the invention and push of T4-only meds, new doctors are mostly being taught to prescribe T4-only medications and nothing else. Doctors now claim NDT is outdated and less reliable than T4-only meds, despite there being many thyroid patients who claim that T4-only brands like Levothyroxine and Synthroid, fail to properly treat their hypothyroidism and symptoms; like me. And many claim NDT works better for them. Like me!

Many alternative and progressive doctors are also prescribing and using NDT medications in their thyroid patients and swear by it as their number one drug of choice for treating hypothyroidism.

T3’s Negative Time in The Spotlight

As a result, patients were admitted to hospital with dangerous symptoms of hyperthyroidism. So you can see why many endocrinologists and doctors today have an aversion to T3 or T4 and T3 combination medicine, for hypothyroidism. However, it’s not fair on the patients who do need it to feel better today, and it can be used safely and effectively.

What did they fail to mention? There is no evidence to support using levothyroxine in preference to natural desiccated thyroid either. The research hadn’t been done either way…

Interestingly, the ATA’s survey results of over 12,000 people published in May 2018 has since contradicted this. [1]

Second, patients taking natural preparations, rather than synthetic hormone replacement therapy or combination therapy, were more satisfied with their treatment. DTE (animal-derived natural thyroid preparations or desiccated thyroid extract) was the original form of treatment and received a satisfaction score of 7. DTE was widely replaced in the 1960s when L-T4 (levothyroxine, a synthetic hormone replacement therapy) could be mass-produced inexpensively; its patients gave it a score of 5. The combination therapy of L-T4 along with synthetic T3 (liothyronine or cytomel) received a satisfaction score of 6. Patients taking DTE were less likely to report problems with weight management, fatigue/energy levels, mood, and memory compared to those taking either the L-T4 monotherapy or the combination therapy.

A another study conducted by Thanh D. Hoand, DO, who presented his research at the Endocrine Society Annual Meeting in June 2013, backs up the positive effects of treating hypothyroidism with NDT. Dr. Hoang’s research proved that NDT is a viable alternative to Levothyroxine. Almost half, 49%, of the seventy patients involved in the study preferred NDT treatment compared to just 19% of patients who preferred Levothyroxine.

This whole situation makes me frustrated. It makes me angry. It upsets me that so many people out there, living with hypothyroidism, are receiving a sub-standard quality of treatment, because of this.

Many patients don’t even realise they’re inadequately treated. They’re also diagnosed with depression, fibromyalgia, Chronic Fatigue Syndrome, acid reflux, amongst many other things and they think they have all these separate conditions, when in reality, they could well be being caused by an inadequately treated thyroid problem, and not being on the medicine right for their needs.

My acid reflux, depression, aches and pains and chronic fatigue all went after being on NDT for a few months. I now just take my NDT each day and I need no other medicine. No antidepressants or anti-anxiety meds, no acid reflux meds, no pain killers.

If you don’t feel well on T4-only medicine such as Levothyroxine and Synthroid (to name just two), or have been diagnosed with more than just an underactive thyroid, or you have other symptoms or ailments, maybe a doctor hasn’t even taken seriously, please get a full thyroid panel blood test done, and check your thyroid levels. Most importantly, your Free T3 and Free T4, although TPOAB and TGAB are also very beneficial to test.

It’s worth knowing that you can order full thyroid panels yourself from online laboratories too. Find a UK lab here and a worldwide lab here.

If you’ve had these tested, then make sure they are optimal. This can make all the difference.

You may just do better on another thyroid medication.

NDT is available on prescription in the UK, on a named-patient basis. It is made according to certain quality standards, contrary to what some doctors say. However, it is still an unfortunate fact that many thyroid patients continue to self-source this medication to get their quality of lives back. Self-sourcing should never be taken lightly and I always suggest that you have medication prescribed by a doctor wherever possible. Buying medications online carry a lot of risks. Many of us have to go private to get these medication options.

If you’re struggling to find a doctor who will prescribe alternatives to just T4-only medication, you could also try asking your pharmacist if they know any doctors who prescribe them.

Have you asked to try NDT?

You can click on the hyperlinks in the above post to learn more and see references to information given. You can also see:

The book Be Your Own Thyroid Advocate: When You’re Sick and Tired of Being Sick and Tired, which builds on this article in detail. Reclaim your thyroid healthy life. 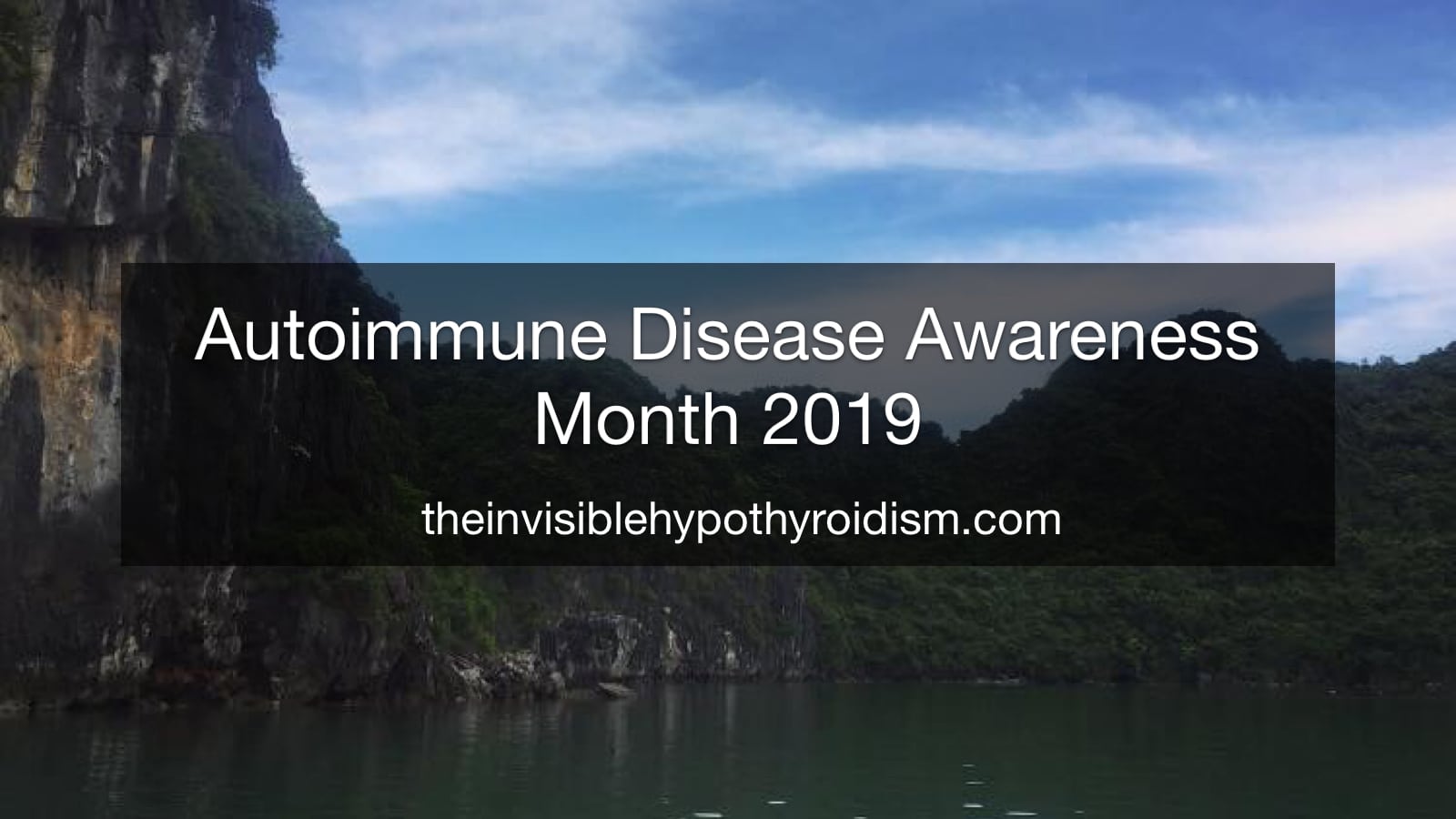 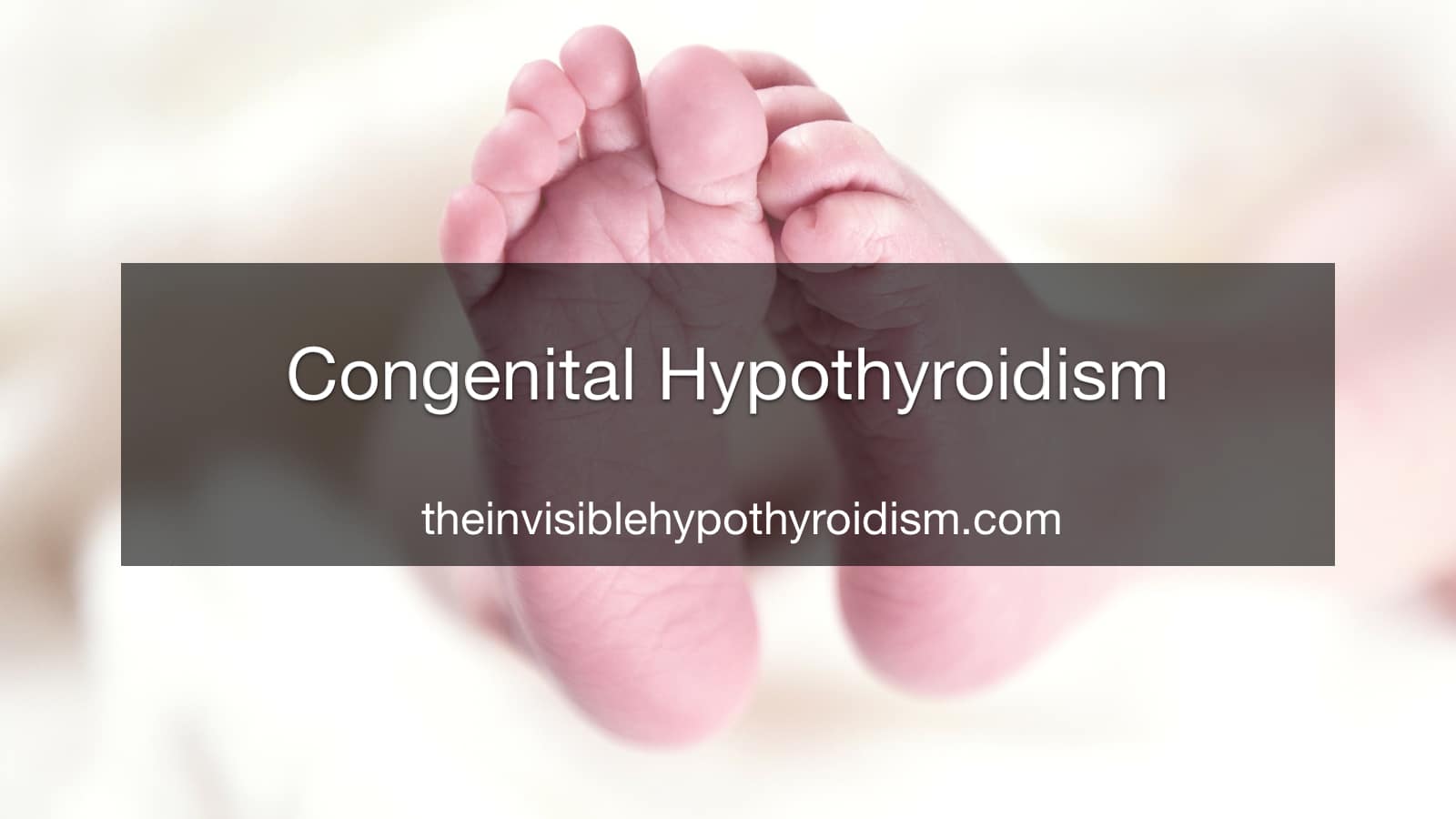 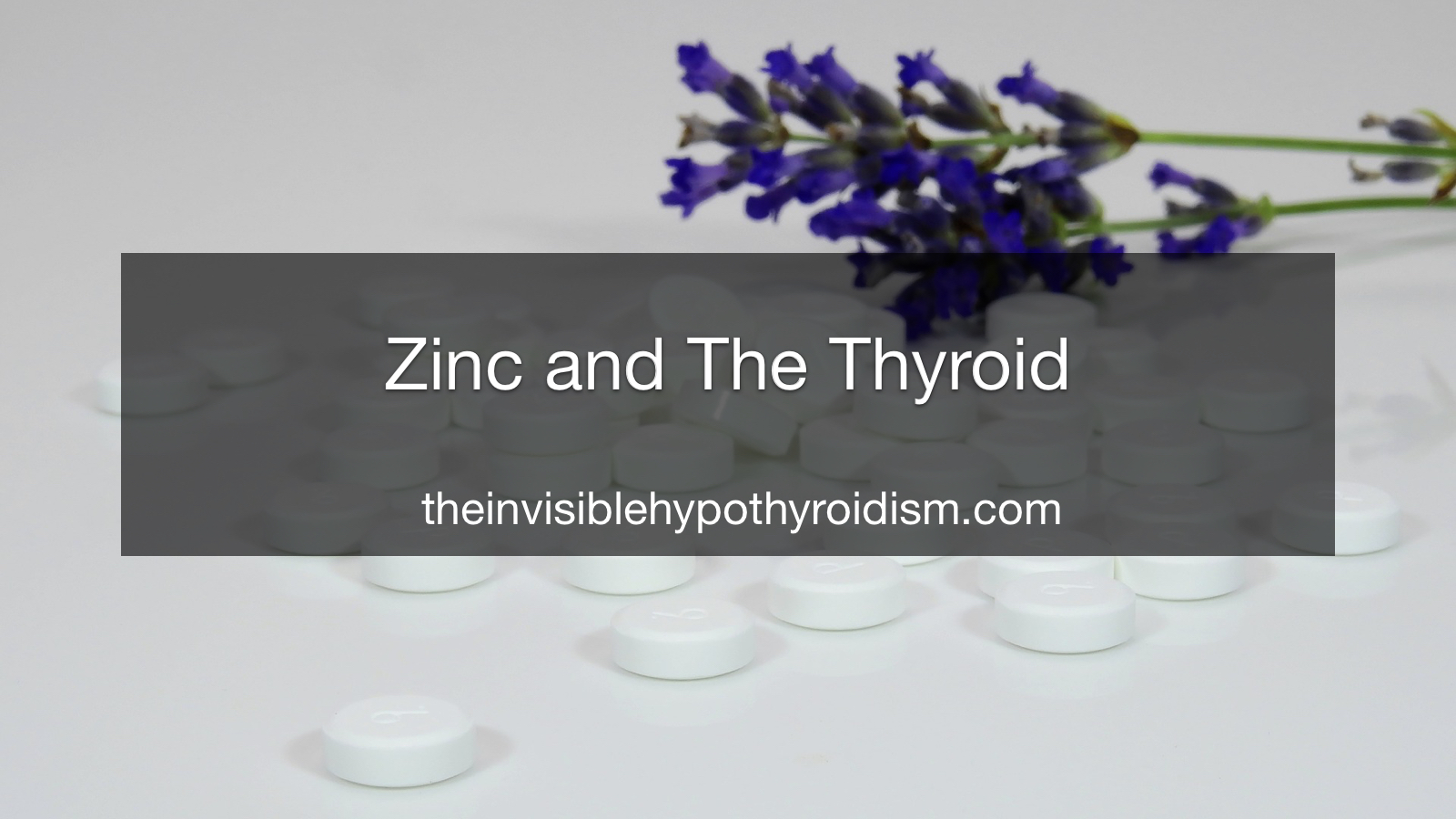 Zinc and The Thyroid

Don't Just Read Thyroid Books and Websites, Put It in to Action!

You Should Be Your Own Thyroid Advocate

5 Ways to Be Your Own Thyroid Advocate

Should Thyroid Patients Get The Flu Vaccination?

🕰️ I’ve been staying up too late and feelin

Do you have reflux? 🤢 😞 Many people with hy

🫣 Is it just me or does that wait between takin

🦋What Does ‘Be Your Own thyroid Advocate’ M