A Rant: Why It’s Important to Be Your Own Health Advocate 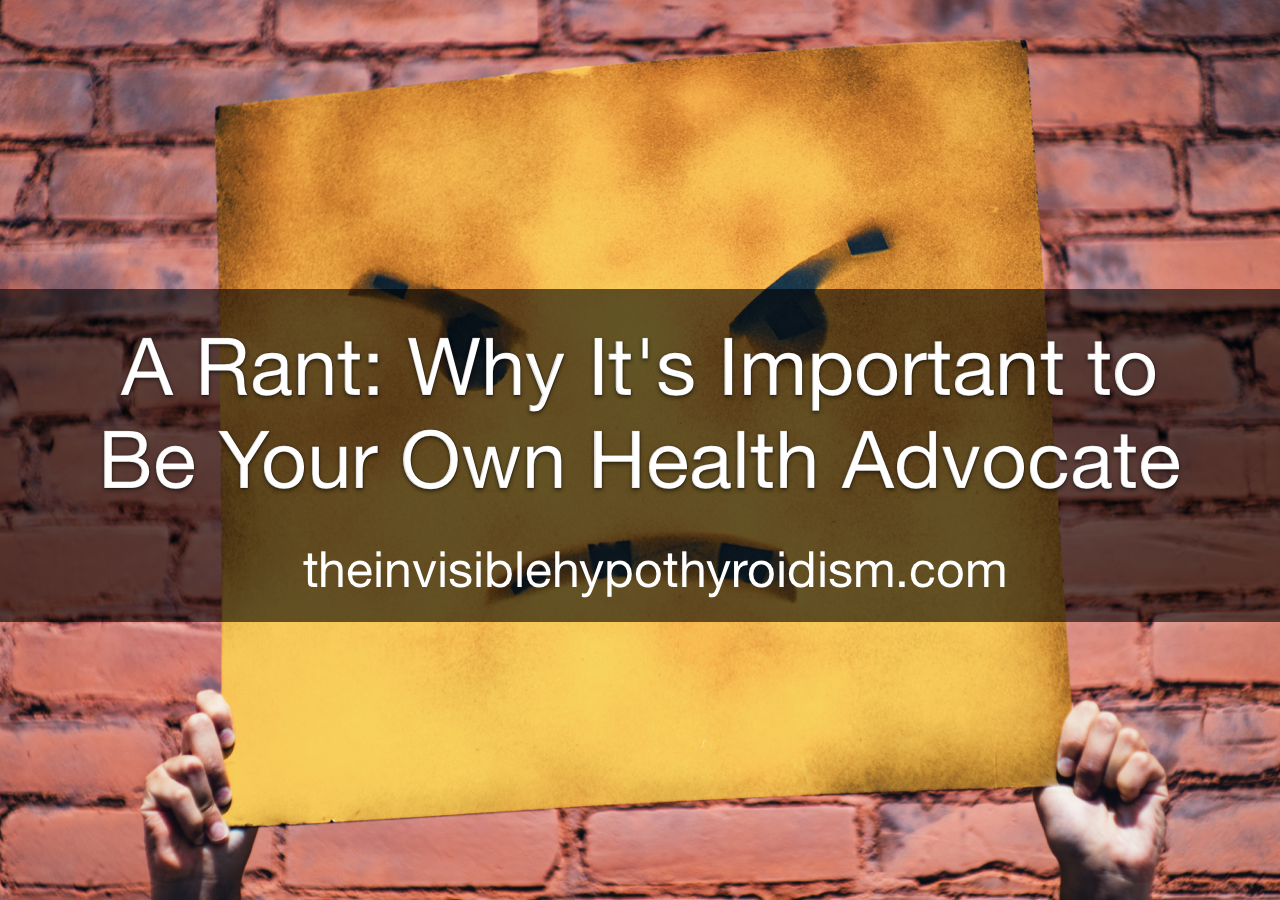 ‘Be Your Own Thyroid Advocate’ is literally the tagline of my website and name of my first book – I’ve made it no secret that the reason I was able to go from barely functioning thanks to an undiagnosed thyroid condition, to getting my health back on track again and resuming a normal quality of life, is because I took ‘be your own thyroid advocate’ literally.

I had to learn to be my own advocate when it came to my health. Being passive meant I got sick and stayed sick.

Too many people are being let down by medical systems and medical practitioners who miss crucial diagnoses and symptoms which should point them towards possible causes.

Why I’m Reminding You To Be Your Own Health Advocate

I’m feeling angry today and I needed to rant about this topic because my own husband has been complaining of feeling tired, worn down and low in mood for a while now.

With everything I’ve learnt myself in the last few years, I told him to ask the GP for some comprehensive testing. I suggested a full thyroid panel (of course), vitamins such as B12, iron, folate, D, coeliac screening (he’s also been having some digestive complaints) and more. I was particularly adamant on testing his Vitamin D levels because he has dark skin and I know this is a risk factor for low Vitamin D levels. 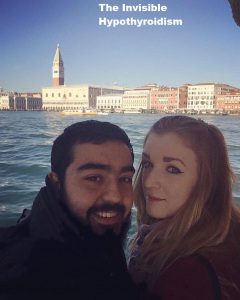 When he went to the GP last week to request these, he was brushed off immediately. Told that he was ‘too young’ to have these kind of health checks be necessary, the GP essentially played down his concerns. However, he’s learnt to be a patient expert and put his foot down via my own experiences with banging my head against doctors surgery brick walls, and managed to convince her to run a bunch of tests anyway, including the ones I suggested. She begrudgingly eventually agreed, but told him that she didn’t expect anything to come back.

He has also developed an interesting, patchy area of skin, which I suggested could be Vitiligo, an autoimmune disease I’m aware of due to belonging to the autoimmune community myself (thanks, Hashimoto’s!). Mentioning this to the GP at the same appointment, she was actually very intrigued by this, admitting she didn’t know what it was but that she would run additional testing.

Today, Adam saw the GP for his results. He is Vitamin D deficient and has been diagnosed with Vitiligo. As he messaged me this news, my heart sank and I was shocked. Surely I, a non-medical professional, didn’t nail what his health issues were? The GP was so adamant that there was nothing wrong with him, yet his own wife spotted the signs and symptoms. How was the GP wrong and I right?

However, this isn’t the first time this has happened.

(He ordered his Vitamin D test from here.)

For years, I have told a friend that I suspected she could have an undiagnosed thyroid condition. She was finally tested recently and sure enough, she does.

I told three other people to get their Vitamin D levels checked this year because they’ve been tired, feeling depressed or low in mood, and having other signs and symptoms of this low vitamin. I’m not kidding when I say that all three came back as deficient in Vitamin D.

It’s sad when a doctor listens to a patient’s concerns and doesn’t think to test something that seems so obvious. What else are they not thinking to check? What else is being missed? After all, not everyone has someone as clued up on health issues as myself, to direct them on what to test and what to look for. But these people have been to the doctor and complained of the typical symptoms of low Vitamin D and thyroid issues, but not been checked for them.

It’s frustrating when medical professionals should know the signs, symptoms and risk factors of certain diseases, health conditions and vitamin deficiencies, yet don’t think to check them, and someone is walking around feeling unwell when it could so simply be addressed. If something as simple as taking a Vitamin D supplement that you need, helps your low energy and mood (a lot of people are depressed from it and don’t know) – doctors really should be taking it more seriously to screen for these things and not tell people they ‘can’t have that’ when they clearly can!

Presenting with mounting symptoms of hypothyroidism and Hashimoto’s for years, no doctor thought to test me, as I was ‘too young to have a thyroid condition’ apparently. Yet here I am. And when I was eventually diagnosed, I was incredibly ill from these missed diagnoses. This is why I stress the importance of advocating for yourself, to other people.

It shouldn’t take someone like myself to be encouraging others to go and ask for tests A, B and C and ‘make sure you get a print out of the test results to check they actually tested it’. We shouldn’t have to be our own doctors.

Adam got a printed copy of his test results and we can see that the coeliac screening wasn’t even tested, despite the GP saying it would be. Did the GP really request it or did the lab miss it? Who knows, but we shouldn’t feel like we have to double check, in order to ensure a diagnosis isn’t missed. Yet, I know firsthand that this happens.

None of the people around me were checked for their issues and diagnosed without a fight from the patient. Why is it taking someone who is just an ‘expert in their own health’ to notice these? Doctors didn’t think to test until they were asked. Aren’t they supposed to be the ones spotting them?

We shouldn’t have to be our own doctors but clearly we do in order to actually get anywhere.

Being a Thyroid Patient and Being Present in Our Healthcare

When it comes to being a thyroid patient, I can’t stress enough how much I recommend we all be clued up on our health and take an active role in understanding things. Do your research, read blogs, books, studies and get other patients’ experiences and go in to your doctor’s office armed with the knowledge you need to make progress. We can’t be passive in this experience. If we are, we are resign ourselves to things going missed or improperly treated.

I tell thyroid patients to keep trying different doctors until they find one they can build mutual respect with and one that actually takes them seriously. After all, you should be an active participant in your own health and healthcare. Unfortunately, we kind of have to be in order to make sure things aren’t being missed.

Many of us are ordering our own tests from laboratories and learning how to interpret the results too. Adam and I will now be ordering further testing because the doctors are still dismissing some of his concerns, despite us being right on the initial ones so far.

Please, be your own thyroid advocate and prepare to stand up for yourself, do research, be adamant in getting the quality of care you deserve and listen to your own body. You know better than anyone if something isn’t right. 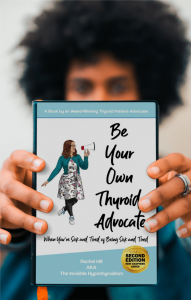 You can read more about advocating for yourself in my book Be Your Own Thyroid Advocate: When You’re Sick and Tired of Being Sick and Tired.

Related post: You Should Be Your Own Thyroid Advocate 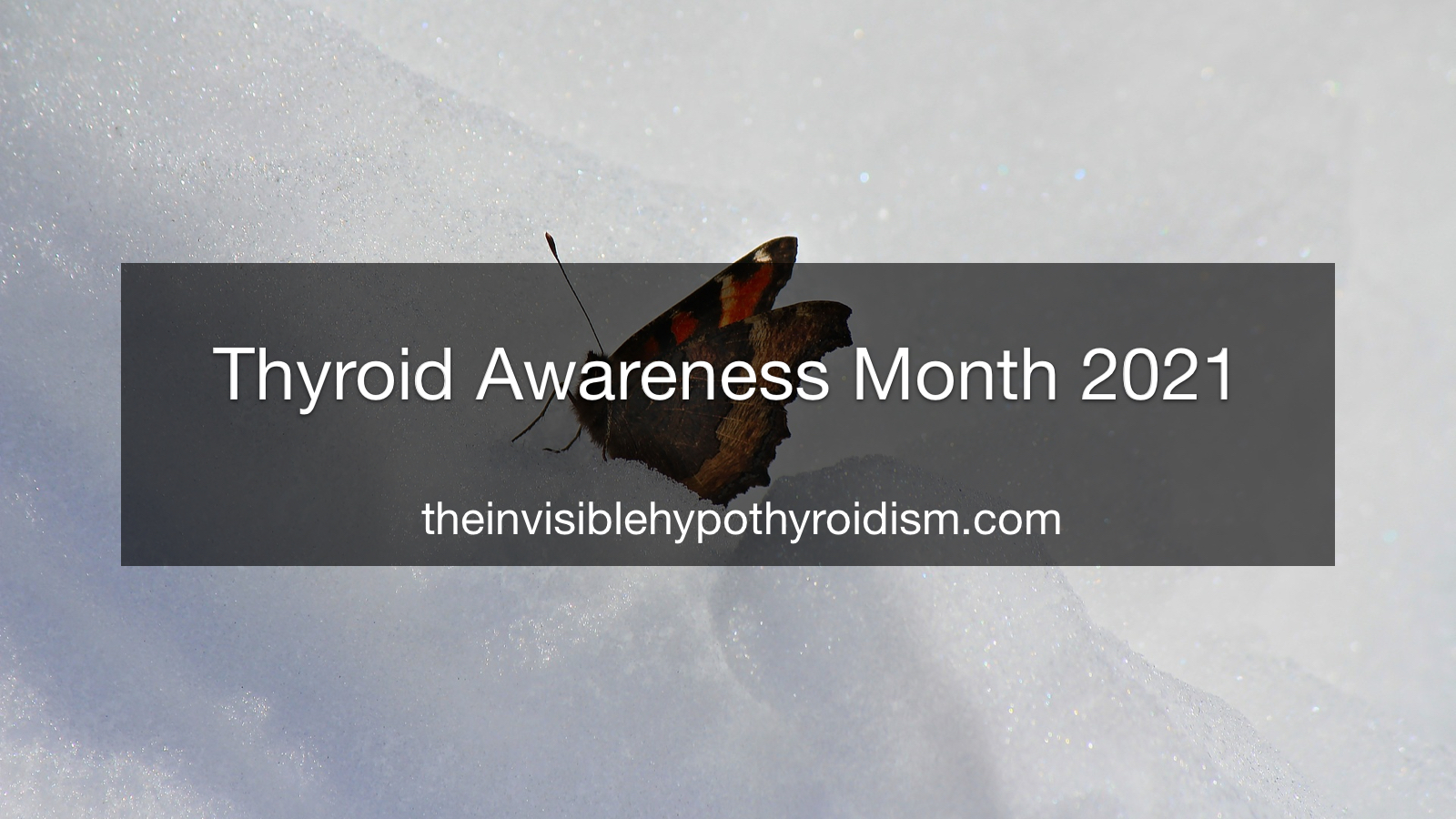 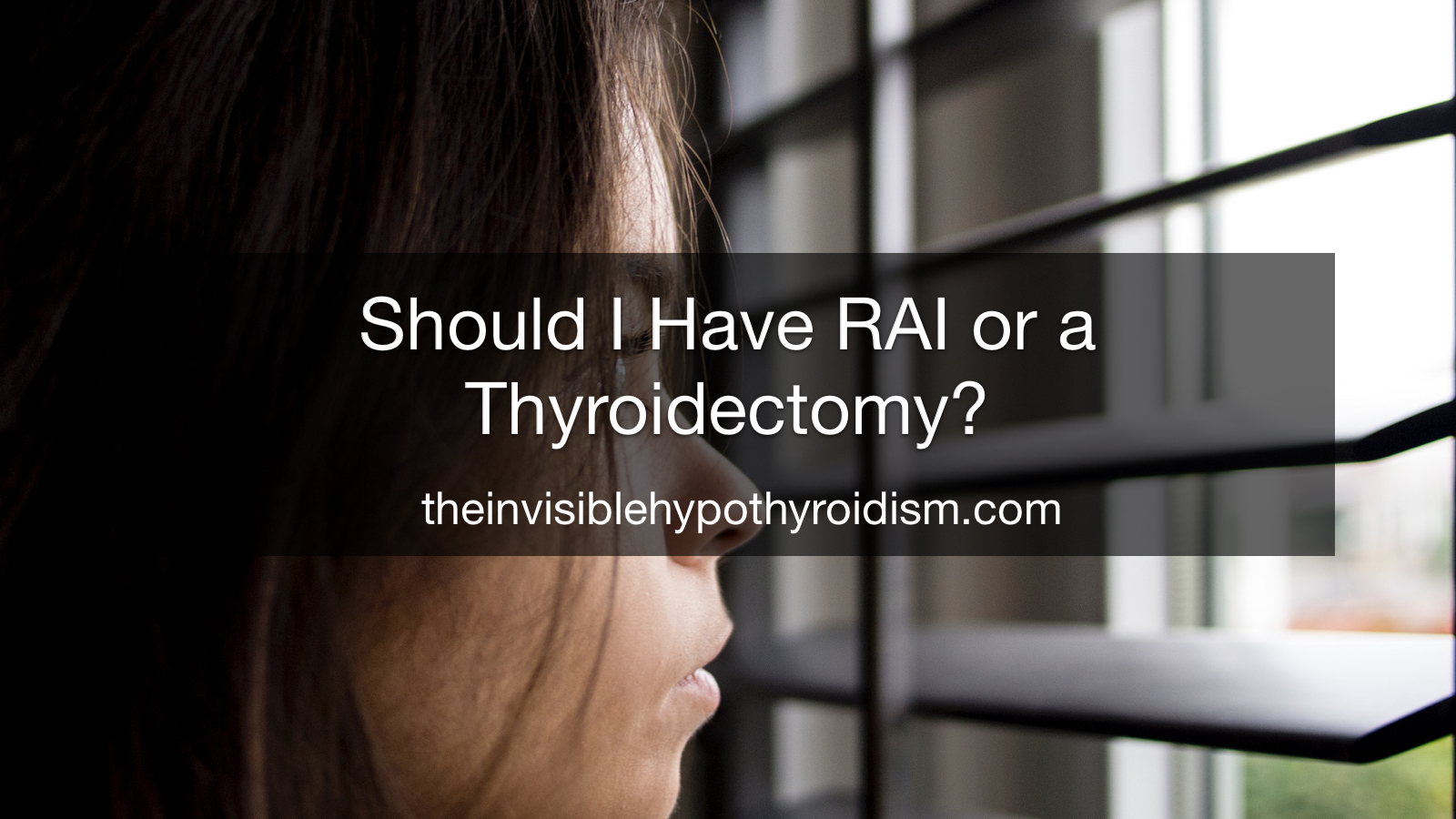 Should I Have RAI or a Thyroidectomy? 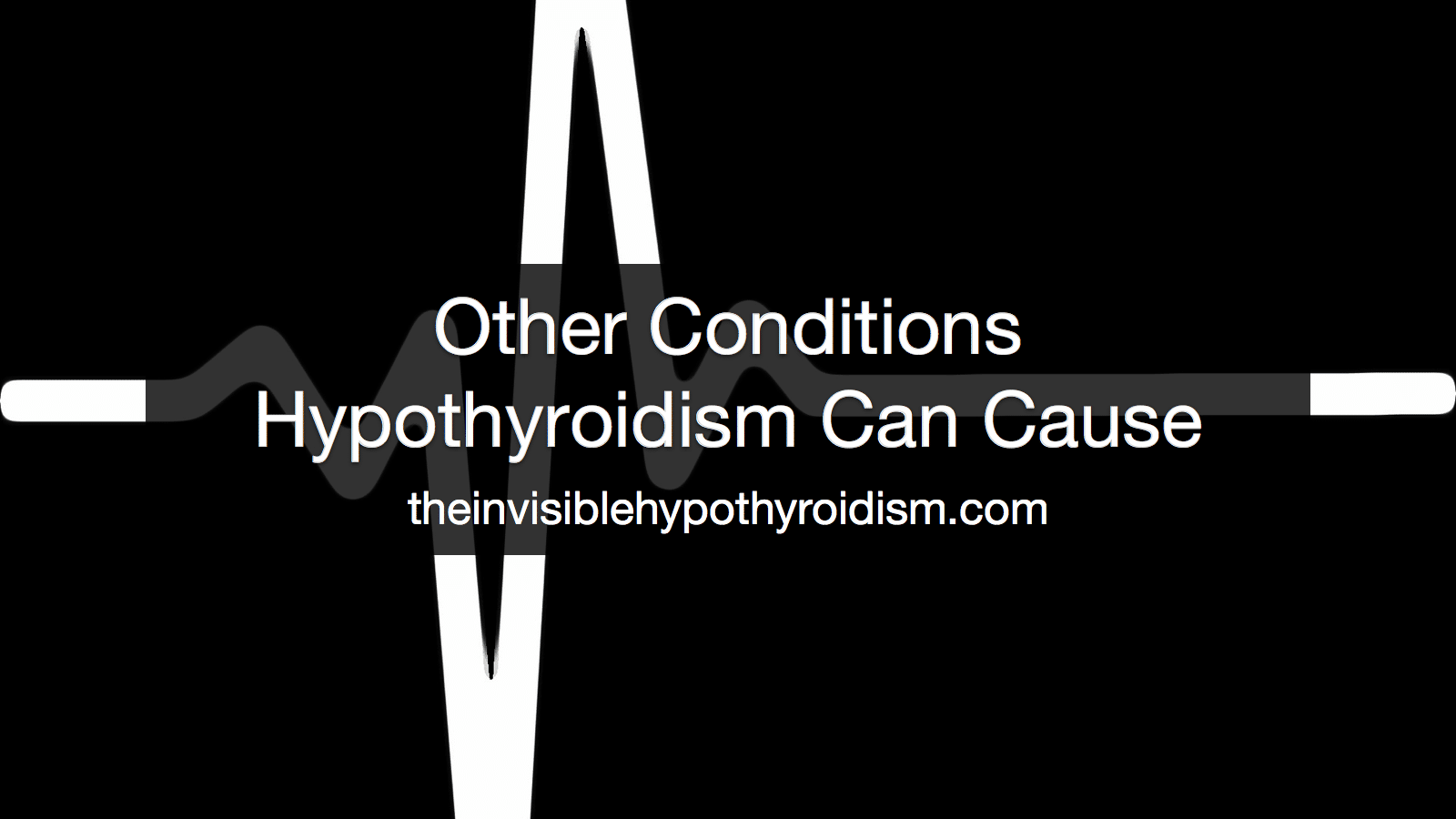 Other Conditions Hypothyroidism Can Cause

What You Need To Know About Doing Thyroid Blood Tests