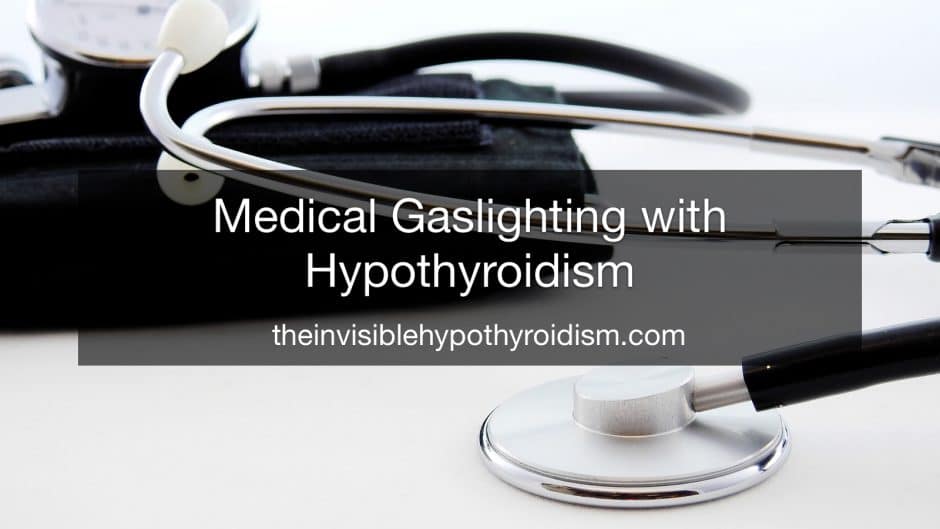 The Google definition of ‘Gaslighting‘ is:

“To manipulate someone by psychological means into doubting their own sanity.”

And ‘Medical Gaslighting’ is when a medical professional, such as a doctor, tries to convince the patient to second guess their instincts and doubt their perception that their symptoms for example, are real.
They may try to downplay symptoms and complaints, tell you that you’re imagining them or even try to convince you that they are caused by something else entirely. In my case, ‘low mood’ and being a hypochondriac were the scapegoat for my physical complaints over the years which turned out to be a thyroid condition. I’ve written many times about the struggles I experienced in finally getting diagnosed with autoimmune hypothyroidism and unfortunately, it’s not a rare story.

I hear from many other people, both men and women, who experienced doctors gaslighting them for years; phrases such as ‘It’s all in your head’, ‘Your test results are fine so there’s nothing wrong with you’ and ‘These sound like a low mood problem. Have some antidepressants’, are not uncommon.

Read my open letter ‘Dear Doctor, It’s Not All in My Head’ here.

The problem with thyroid disease is that the many symptoms – heavy fatigue, muscle aches and pains, hair loss, fertility issues, digestive issues, cold intolerance, loss of libido, weight fluctuations, dry skin, brittle nails – affect the whole body, and so hypothyroidism being mistaken for something else is hardly uncommon. Men in particular seem to face a particularly hard time with being diagnosed with this hormonal imbalance because we tend to associate hormonal conditions so heavily with women and even doctors can be guilty of this.

Of the 750 million people estimated to be living with thyroid disease worldwide, as many as 60% are undiagnosed – are they undiagnosed because doctors are dismissing their concerns and not thinking to run the appropriate tests?

Hopefully, thyroid disease is finally picked up on in those undiagnosed and a diagnosis is made, informing the patient that it wasn’t all in their head, there was something wrong with their body and it wasn’t down to a mental health condition. Despite months or even years of being told otherwise. After all this time, their symptoms and concerns were legitimate and the doctor, who shrugged off their symptoms and tried to make the patient doubt their own sanity and beliefs that they know their body better than anyone else, has nothing more to say. It’s just one of those things because the symptoms can be mistaken for so many other conditions.

But the fact that the symptoms of hypothyroidism are so wide reaching and so many people have it, therefore makes it obvious that we need more regular screening to get those living with it diagnosed and treated sooner. We also need more people (especially doctors) to be more aware of thyroid disease’s existence and manifestation, especially in females and all ages too.

Yes, developing a thyroid condition at a young age is less likely but it happens to a fair few. Doctors need to be listening to their patients more closely and not dismiss their concerns to being all in their head. Instead, they need to run further tests and dig deeper to help their patient. After all, that is their job.

Otherwise, often years have gone by before the thyroid condition is finally picked up on and in that time the thyroid patient’s work life has suffered, their personal life, relationships and more. Many people are losing years of their life unnecessarily. Take it from someone who was grasping at the straws of her shattered life, aged twenty-two and hypothyroid, after being told for years that there was nothing wrong with me, especially as I was so young. After all, thyroid conditions only affect middle-aged women, right?

Research cited in the Journal of Law, Medicine & Ethics in 2001 indicated that women even get prescribed less pain medication than men after identical procedures, are less likely to be admitted to hospitals when they complain of chest pain, and are significantly more likely than men to be under-treated for pain. But when thyroid disorders are such a predominantly female condition, why aren’t we being taken more seriously as candidates for it?

Hypothyroidism and Hashimoto’s affect a lot more women than men (7-15 times more women), but sadly a lot of women, when they go to the doctor complaining of hypothyroidism symptoms such as tiredness, depression, brain fog, memory problems, weight gain etc. are made to feel as if they are hypochondriacs, just menopausal or depressed. Their thyroid isn’t even investigated.

You’re Not Imagining It

For those who experience weight fluctuations such as weight gain with hypothyroidism, how often have they heard a doctor dismiss their concerns with “Your test results are fine, it must be down to your diet. Just eat less and exercise more,” yet the hypothyroid person has already been doing this, even to the point of making their thyroid condition worse from starving themselves with such little calorie intake and forcing exercise to the point of exhaustion. But they must be lying; not doing enough or trying hard enough.

What these patients often discover is that a key component of the thyroid panel (a group of tests that give a comprehensive look at your thyroid health), such as Free T3 hasn’t been tested and when they do finally get it tested, often by going private, it’s far from optimal. In fact, they find that a low Free T3 is the cause behind their weight gain and other physical symptoms and finally, they get the confirmation that they aren’t imagining it at all.

It is because of this kind of attitude from medical professionals, that more and more of us are learning to advocate for ourselves and our own healthcare.

For years I told myself ‘the doctor knows best’ and I kept going back to the surgery with mounting symptoms, having them test the same basic things they always did and tell me nothing was wrong with me; I was just a hypochondriac. When there was something wrong with me.

The whole experience of being a thyroid patient has taught me to fiercely protect my body, especially from those who try to deny that what I’m experiencing and telling them is wrong.

If you’re being gaslighted (and you may have only realised after reading this article), there are some things you can do. Firstly, change your doctor! I went through numerous GP’s at my doctors surgery until I found one who actually listens and tries his best to understand my situation and then work with me. Needless to say I haven’t seen any of the doctors who tried to convince me that my physical health conditions were a figment of my imagination again. Secondly, as the message of my website says – be your own health advocate.

Have you been medically gaslighted?

The book Be Your Own Thyroid Advocate: When You’re Sick and Tired of Being Sick and Tired, which helps you to advocate for your own thyroid health.


If you found this article beneficial, please take a moment to share it so we can help others get better with hypothyroidism and Hashimoto's, whilst also raising awareness.
Share2K
Pin14
Tweet
2K Shares

3 thoughts on “Medical Gaslighting with Hypothyroidism”